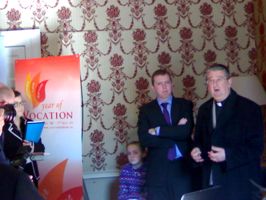 His Grace Diarmuid Martin, the Archbishop of the Archdiocese of Dublin led the launching of the Year of Vocation for the Catholic Church in Ireland. It was held during the 6.30 p.m. Mass at the Saint Mary’s Pro-Cathedral, Dublin City. Previous to it, a press conference was held which was attended by different religious groups in Ireland. The Catholics bishops of Ireland has declared 13th April 2008 to 3rd May 2009 as the Year of Vocation.

Several activities that will be highlighted during the Year of Vocation such as a national prayer campaign for students at examination time; a rally for World Youth Day to coincide with the events in Sydney on 15-20 July; and, collaboration with the national pilgrimage centres to reflect on the theme of vocation during their seasons.

Let us pray that this Year of Vocation for the Church in Ireland will be a fruitful one.