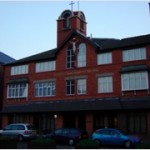 In the late 1950s the Archbishop of Liverpool, Most Reverend John Carmel Heenan, invited the Congregation of the Blessed Sacrament into his Diocese. Fr. Emile Berthiaume, S.S.S., local Superior of the Leicester Foundation went to meet His Grace at St. Augustine’s Oratory, Great Howard Street, in Liverpool’s dockland, the church the Archbishop had offered. It was always envisioned that this church would be a stepping stone to having a city centre church.

In the late 1960s the then incumbent Rector of St. Augustine’s Oratory, Fr. Francis J. Ripley, later a Canon of the Liverpool Cathedral Chapter, felt himself sufficiently recovered from a bout of ill-health to return to full pastoral responsibilities, and had requested the Archbishop, Most Reverend George Andrew Beck, A.A., to do so. Fr. Ripley was acquainted with out Institute’s desire to have a Foundation in Liverpool’s City Centre, and himself felt that St. Augustine’s would give us a foothold in the Diocese and in City of Liverpool for us to be able to negotiate better our future. Moreover, by having a desirable option to present his own case to the Archbishop would help his leverage to return to full pastoral ministry! Subsequently the Archbishop wrote to us and, Father Thomas Arthur McNevin, S.S.S., a solicitor by profession, who successfully had made foundations in the Archdiocese of Westminster and the Archdiocese of Dublin, took up the cudgels to pursue the prospect of a Liverpool Foundation. 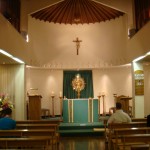 Fr. McNevin was keen to embrace the opportunity of a Foundation in Liverpool because it was (and remains) numerically the largest diocese in England & Wales. He felt for our ministry to be effective a large practising Catholic population was required. Moreover, he hoped it would be a source of many vocations to our Institute. Besides, the London project had been put “on hold” due to various circumstances.

The recently opened (1967) Metropolitan Cathedral of Christ the King more or less made the Pro-Cathedral of St. Nicholas a redundant church next to the main rail line station near Lime Street. Liverpool Corporation was anxious to build on the site where the Pro-Cathedral was located a Royal Mail Sorting Office. In negotiations the Archbishop surrendered his Pro-Cathedral to the Corporation with a proviso that “the Blessed Sacrament Fathers, if they so wish, would be accommodated with a church building in the proposed redevelopment of Clayton Square shopping sector in the City Centre”. This information Fr. McNevin always spoke of and it was printed annually in the free pocket Diaries which were given to patrons of St. Augustine’s each New Year during our tenure there.

It is astonishing that when the time arrived for the development of the shopping area in Clayton Square no legal document could be found either by our Institute or by Liverpool Corporation or by the Archdiocese! By then Fr. McNevin had returned to his native Australia where he died on 3rd November 1980.

Yes, despite many obstacles – not least from within St. Ann’s Province -the Congregation made a Foundation of St. Augustine’s Oratory, Great Howard Street, Liverpool, the first community members arriving late December 1970 and early 1971. By this time the property of 44 Great Howard Street had been condemned by civil authorities as “unfit for human habitation”!

One of the exigencies made by the Provincial Council for making the Foundation was that Fr. Roland Huot, S.S.S., recently completed his term as Superior General, be the local Superior. This he consented to, though it must be said that it was Fr. McNevin who did the Trojan work of negotiations with the Archdiocese and later with Liverpool Corporation when acquiring the leasehold of the Jacey Cinema in Clayton Square.

Fr. McNevin together with Fr. Huot frequently scoured the city centre regarding a future move there. Fr. McNevin chanced on seeing a property in Clayton Square where the proposed redevelopment was scheduled to take place. The building, the Jacey Cinema, was a lurid sex cinema! Fr. McNevin had a brain wave that the Institute should pursue acquiring the remainder of the leasehold from the Jacey Cinema. This would afford a tangible experiment to see would the people of the city and diocese support us in our project. 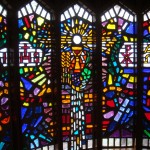 Borrowing layman’s attire – suit, collar and tie – in Fr. Huot’s case from Mr. Joe Allen from Boundary Street and, in Fr. McNevin’s case, from the more diminutive Mr. Fraser of Crosby, both priests one afternoon paid (££) a visit to the Jacey Cinema in an attempt to view secretly the property’s suitability to be temporarily converted into a chapel. Both were sufficiently impressed and it was decided to meet with Archbishop Beck who agreed to the proposal since the syndicate for the redevelopment of Clayton Square were hesitating because of the national economic situation in their pursuit of the scheme.

On the occasion of this visit to the Jacey Cinema Fr. McNevin placed behind one of the radiator’s in the cinema a Miraculous Medal. When later our Institute acquired the leasehold of the property this medal was still in situ.

The Shrine of the Blessed Sacrament, Clayton Square, was blessed and inaugurated on 21st November, 1972, and became a successful project for a period of twelve years before the community relocated to its present site at Dawson Street, formerly a furniture warehouse, which was Dedicated by Most Reverend Derek Worlock, C.H., Archbishop of Liverpool, on 27th November, 1985.

Strange to relate, the Archbishop dedicated the relocated Shrine of the Blessed Sacrament, Dawson Street, on 27th November, 1985, Feast of the Blessed Virgin Mary, Our Lady of the Miraculous Medal.