An Impasioned Apostle of the Eucharist 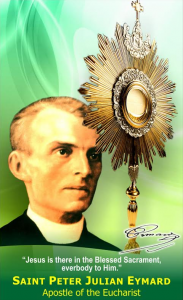 Peter Julian Eymard, born at La Mure d’Isère (Grenoble) in France, on the 4th of February 1811, was baptized on the following day. After some family and vocational difficulties he eventually entered the diocesan seminary of Grenoble and, in 1834, was ordained a priest. In 1839, after a number of years of zealous pastoral ministry, he began an experience of religious life, entering the newly formed Congregation of the Marist Fathers, at Lyons. In a short time he gained the confidence of the Founder, Father Colin, who entrusted him with various important responsibilities.

At the same time his search for the will of God continued and led him to direct his life more and more towards the Eucharist for which he wanted to achieve something exceptional. A significant point in this search was reached when he underwent a spiritual experience at the sanctuary of Fourvière in Lyons in January, 1851. While praying there he was “profoundly moved” by the thought of the spiritual abandonment in which the secular priests were living, of the lack of formation for the laity, of the little devotion there was towards the Blessed Sacrament and of the sacrileges committed against the Eucharist. As a result he decided to form a Third Order of men dedicated to reparatory adoration. In the years that followed this would evolve into the definitive idea of establishing a religious Congregation entirely dedicated to the worship and apostolate of the Eucharist.

Not being able to carry out this work from within the Marist Fathers, Fr. Eymard left the Institute and came to Paris where, on the 13 May 1856, he founded the Congregation of the Blessed Sacrament. The new religious Institute for men immediately received the approbation of Archbishop Sibour and, later, the blessing and the definitive approbation of Pope Pius IX (1863).

The work began under somewhat poor conditions in some premises situated in rue d’Enfer where, on the feast of the Epiphany in 1857, the foundation was officially inaugurated with solemn exposition of the Blessed Sacrament. Again in Paris, in 1858, Father Eymard, with the help of Marguerite Guillot, founded the Congregation of the Servants of the Blessed Sacrament for women. In 1859 he opened a second community at Marseilles and placed in charge of it his first companion, Fr. Raymond De Cuers. A third foundation was established at Angers; then two others at Brussels and a formation house for the novitiate at Saint Maurice in the diocese of Versailles.

In the meantime, these years of “eucharistic” life saw Father Eymard involved in apostolic work, directed particularly towards the poor on the outskirts of Paris and towards priests in difficulty, in the work of first communion of adults and in many and various preaching commitments, centered particularly on the Eucharist. Furthermore, certain initiatives which began or developed after his death can be traced back to his eucharistic activity and spirituality, as for example, the Eucharistic Fraternity for the laity, the Association of Priest Adorers inspired by his concern for priests, International Eucharistic Congresses.

Worn out by his responsibilities as Founder and first Superior General, and marked by trials of every kind, Peter Julian died at the place where he was born at only 57 years of age on the lst of August, 1868. Beatified by Pius XI in 1925, he was proclaimed a Saint by John XXIII on the 9th of December 1962 at the conclusion of the first session of the Vatican Council II. Exactly 33 years later, on the 9th of December 1995, his feast day was inserted into the general Roman calendar and he is now presented to the whole Church as an “Apostle of the Eucharist”.

The life and activity of Saint Peter Julian Eymard was entirely centered on the mystery of the Eucharist. Initially he approached it with the theology of his time, stressing particularly the “real presence”. Nevertheless, he was able to gradually free himself from the devotional and “reparatory” aspect with which the eucharistic piety of his age was almost exclusively concerned and he arrived at the point of declaring the Eucharist to be the center of the life of the Church and society: “No other center than Jesus Eucharistic “.

EUCHARIST: SACRAMENT OF LIFE
HIS VISION OF THE EUCHARIST
THE NOURISHMENT OF DAILY LIFE
THE SOURCE OF A NEW WORLD