THE NOURISHMENT OF DAILY LIFE 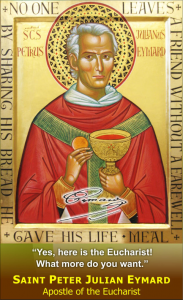 Eymard was a tireless promoter of frequent communion. In a beautiful text of 1863 he clearly expresses the central role of the Eucharist. “Convinced that the sacrifice of the holy Mass and communion in the body of the Lord are the living source and the aim of the whole of religion, each one has the duty to direct his piety, his virtue, his love, so that these may become means that will allow him to reach this goal: the worthy celebration and the faithful reception of these divine mysteries.”

The saint broke with the practice of his time in which, under the pretext of respect for the Sacrament, many pastors prevented the faithful from approaching the eucharistic table. This is how he expressed himself in one of his letters: “Whoever wants to persevere, let him receive our Lord. He is the bread that will nourish your failing strength, that will sustain you. The Church wants it this way. She encourages daily communion: as a witness to this we have the Council of Trent. Someone will say that we need to be very prudent… But our reply to that would be: this nourishment, if taken at very long intervals, would have to be considered as an extraordinary food. Therefore, where is the ordinary nourishment that is meant to sustain me each and every day?”

Communion ought to become the pivot of the christian life: “Holy communion should be, above all, the aim of christian life … Every pious exercise that does not have some relationship with holy communion is not directed towards its main goal”. To receive the Eucharist in communion fruitfully is an action that changes one’s life. “Our Lord comes into us sacramentally in order to live there spiritually”. That is what he wrote in notes he made during the “great retreat of Rome” (1865). And, a few months before his death, he wrote: “He who does not receive Holy Communion has only a speculative knowledge. He knows only the terms, the words, the theories; he is ignorant of what they signify … But he who receive Holy Communion, while previously he had just an idea of God, now he sees him, recognizes him at the holy Mass.”