Patterns of Thinking for Our Way of Living: The New House of Studies- Chicago, IL. 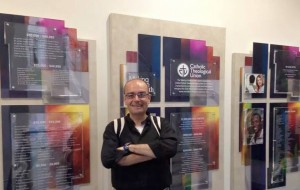 Returning to the United States after the completion of my Canonical year in New York in January 2013, it is funny how little things serve as a reminder that not everything is the same between Anglo-American friends.  The paperwork that accompanied me from Glasgow does not fit into the neat little pockets I purchased from Office Depot.  It was only then that I remembered the U.S. standard letter paper is not the same as A4.  However, the rest of life seems to be a good fit.

The formation journey that formally began in the Community Chapel with the St. Jean Baptiste SSS Community on 6th January 2012 has many voices to narrate it.  A bit like Fr. Peter Julian’s intuitive sense of the aspects and episodes of his life being knit-together for the purpose of promoting the ‘Reign of the Eucharist’, I am mindful that I am being given a new opportunity for ministry within the Congregation of the Blessed Sacrament and that nothing ought to be wasted in that mission.  Formative experience in professional social work, ordained ministry in the Anglican Church, and more recently the experience of day-to-day living in countries and cultures other than my own are making this precious time of initial formation a particularly rich and internationally flavored experience.

In fact the more I reflect on days past the greater the summons of today to recognize and live Religious life joyfully as the gift it is.   It is the re-wording of Soren Kierkegaard’s famous statement about the nature of our understanding. “Life can only be understood backwards”, he insisted, “but it must be lived forwards.”   Because we are never given the vantage point of remaining still in time and looking at life at it is, how we understand is always something ‘becoming.’   Increasingly, I am understanding the life of St. Peter Julian’s Eucharistic Congregation, and my place in it, as ‘life understood backwards, but as lived and celebrated TODAY.’

The Acts of the XXXIVth General Chapter clearly proclaim, “We are ‘one body and one spirit’, one single family, and we should collaborate and express a solidarity at all levels of the Congregation, as regards personnel, economy and formation.  The intercultural community springs from the Eucharist.” [Acts VI, 5, a.]   At this stage in my formation I am realising powerfully that whilst I belong to one Congregation, its life is expressed quite differently depending on location and culture.  To deny that is to naively deny the humanity of who were are as Religious.  It is for that very reason that being part of the formative days of the new House of Studies here in Chicago is such a tremendous opportunity because it is a presence that is animating where the Congregation  desires to be TODAY.   The initial student community here at SSS Chicago will comprise student priests from Vietnam, Sri Lanka, as well as a British scholastic, with Fr. Mike Arkins SSS, a native of Chicago as our pastor. 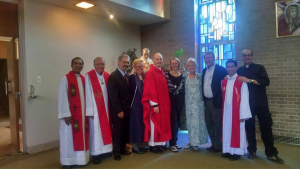 I cannot stress enough how such international initiatives, when they have as their horizon a sense of trust, hope and joy in the truths contained within our Eucharistic charism, prove to be far more than fashionable gimmicks in our increasingly trans-cultural and globalized-world.  They actually lead to the formation of a more humble sense- yet at the same time- confident Religious life.  As a fellow scholastic Brother from the Philippines came to realize during his exposure-year in Ireland and Scotland, when the seed of formation is planted in different soil,  suddenly the seed becomes aware of its own growth in a radically different way: ““It was over ten months ago when I was seeded on the ground of the Celtics. As I was newly planted, I experienced a lot of challenges. I exerted much effort in adjusting to the new environment because it was totally unusual; it was totally different! This is for real.”   [Br. Renoir Oliver SSS, “Bloom Where I am Planted.”  SSS International (12th May 2014)]  The short time I spent with Renoir as I returned to my own Province earlier this year, gave me the opportunity to use his experience as a mirror for understanding my own initial formation journey, which up to that point had been served in the U.S.A. and France.

It strikes me that above everything else that is coming to light in these first days in the House of Studies here in Chicago is the realization that what is hoped for, what is envisaged, is lived.  Not only in our own Religious Congregation but also throughout the spectrum of Religious life in the Church, the realization is that initial formation serves a life of ongoing, life-long, formation.  Religious are formed for formation.   However stupid or endless that might sound, it is a refreshing truth if words contained within a Rule of Life are to be true to themselves and speak to a life lived- else we resemble the glare of the white sepulcher of Christ’s speaking [Matthew 23: 27]- we have all the eloquence and words, but they are empty and lifeless.

Therefore, as envisaged at the start of the millennium, Consecrated Life is the progressive adoption of the attitude of Christ, where “formation is no longer only a teaching period in preparation for vows but also represents a theological way of thinking of consecrated life which is in itself a never ending formation…”  [Congregation for Institutes of Consecrated Life and Societies of Apostolic Life, Consecrated Life in the Third Millennium: Starting Afresh from Christ (London: CTS, 2001) 15]   In my own particular circumstance of serving my Scholasticate period alongside priest-students, I am living daily in sight of the perpetually professed and ordained members of the Congregation ‘the vocation animation’- the gift of the calling to the Eucharistic charism TODAY.  “The consecrated person is, by nature, also a vocation animator: one who is called cannot not become a caller.  There is, therefore, a natural link between ongoing formation and vocation animation.” [ibid, 16.]

The plan is that this year I complete preparatory studies for eventual ordination and for future focused work, which, hopefully next year will be realized in the undertaking of a two-year research program developing still further the scope of St. Peter Julian’s vision for the Aggregation of the Blessed Sacrament.  This is Eymard-family business stuff, which just so happens to contain the fundamental message and meanings breaking open into Christian lives as once encountered by disciples in the Jerusalem Cenacle.  It continues to grab hold of my fascination since being born in me during the  formative novice days in New York with Br. Michael Perez SSS.  The Catholic Theological Union, the home of our studies, has the flavor of Lumen Gentium-in-action.  That might sound a strange description for a theological school, but consider how even before the Church’s membership is sub-divided into ordained and lay, religious and secular, the Church’s own Dogmatic Constitution concerning itself says in self-description the Church is both ‘mysterious’ and ‘sacramental’ as well as being the ‘People of God.’   Our classes are the People of God assembled, ‘the Church at study’ if you like, with lay men and women accompanying religious and diocesan candidates in formation, as well as priests and Religious following sabbatical programs.  Once realized, the People of God at study has become a powerful and meaningful image in my own  formation here, and quite quickly so.

Exactly two weeks to the day before the spiritual-apex of his Vow of Personality, St. Peter Julian wrote to Fr. Alexander Leroyer SSS from his lodgings with the Redemptorists in Rome.  He is consoled by his retreat as his wait for a judgment concerning the Jerusalem Cenacle building is further delayed.  The conclusion to this letter is particularly inspiring to Blessed Sacrament scholastics everywhere, because it sheds light onto our founders personable concern.  “I am pleased with the ordination of dear Brother Henry; give some thought also about Brother Chave, see whether he isn’t getting a little discouraged: that it is temptation!  Once he becomes a Sub-Deacon, he will be freed from that.” [7th March 1865- I 29/54.] 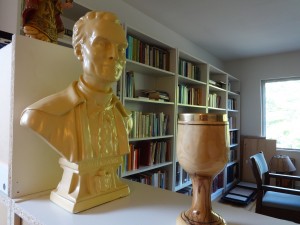 Sometimes I can place my feet quite easily into the shoes of Br. Chave, too discouraged by the words, words, words that make up hours of study and the voices of his surroundings.  However much I enjoy the creativity of study and discovery, I soon realize that the words, words, words that this entails only make a home in me in light of the more quiet, interior and definite language of the Eucharist- the Word that speaks about everything else.  “For us, the voice of Jesus is heard inwardly.  What is this speech, this language of friendship?” asked Fr. Eymard to retreatants.  “In the Holy Trinity is a Word, the type of all words; it is wholly interior and nevertheless real.  It is the Word Eternal…Thus there are words that are inner, spiritual.  But, above all, the word of truth, the word that moves the soul, is interior.  The external word by itself has no power to move.” [St. Peter Julian Eymard, ‘Communion lets you approach God’  How to Get More Out of Holy Communion (Manchester, NH: Sophia Press, 2000) 70.]

In a way, the new House of Studies here in Chicago is a daily invitation, -the TODAY invitation- for studying, yes, but also living what is celebrated here.  The planting of the seed of the Eucharist, for our richer and yet more joyful life together in the Eucharistic Christ in the outpouring of the charism received at his hands, and for the entirety of the mission of the Church.