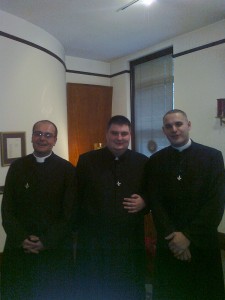 Some of you may be old enough to remember London Weekend Television’s sitcom ‘Two’s Company’, staring Elaine Stritch and Donald Sinden. The basis of the comedy is cultural difference as the banter between the brash confident American writer rubs up against the reserved, poised manner of her hired English butler. Thirty odd years later, the scenario remains largely the same. The Dublin postulants and have now become the Manhattan Novices, and two months into this yearlong adventure, I have been asked to provide some insights into the world of Religious formation, which, I have to say feels a bit like writing a postcard home. It is though a marvellous aspect of this life to find oneself in a culture so different from where my life began. A year in Dublin; a year in the USA, this is a collection of refreshing insights for a convert from Anglicanism who ecclesiology had been (as the name suggests, Church of England) nationally tempered, yet very quickly, after being received into the Catholic Church, have the opportunity the see the impact of faith in two very different countries other than my own. Of course, this is an experience the three of us share in different ways. Not a day goes by without some laughter that naturally arises around the ‘Brits abroad’ theme, except of course this isn’t a holiday, and the winter months in New York are not comparable to Benidorm! It is as if there is a little bit of Elaine Stritch and Donald Sinden in all of us here, and that makes for the experience to be that bit richer.

This hit home the other day. Macy’s had a sale- the perfect excuse for a novice to go and buy a jumper. The assistant begins the sale transaction with the usual antiphon: “Your English- we just love you guys!” “Thank you!” After this was the question about where I was from. After commenting that I grew up in a village outside of Bath, the shop assistant wasted no time to display his learning: “Bath, that place is full of wives…” “Yes, and my mother is one of them!” was the retort. Such is the friendly banter that you find in New York that I have found scarce in other cities. The irony is, I have travelled to the USA to learn about all sorts of things, including Chaucer and his ‘Canterbury Tales’ as part of our programme. The Englishman travels to another country to learn about one of his most legendary countrymen. The American’s it seems to me have a fascination with English literature in a way that I have never encountered at home. Indeed, the programme we follow during the week is varied, ranging from Chaucer to Ecumenism, Liturgy, Mariology, Word of God, and of course, Eymard Studies, which is the primary focus on which everything hangs. If there is something obvious and concrete to say about this noviciate experience, it is entering into the spirituality, history and temperament of the Congregation’s Founder- in short, getting to know him and touching the flavour of the nineteenth century France in which he pursued his Eucharistic witness- that is really paramount.

Of course a noviciate can be undertaken anywhere because the engine room of formation, learning and discernment is interior. That said, being in New York is a wonderful opportunity to couple learning more about the world with grappling seriously with this thing called Religious life: it all amounts to learning about God in proximity to the self. This was Fr Eymard’s great apex moment on retreat in 1865 as he reckoned his existence Eucharistically as the ‘Gift of Self.’ It is at this junction in our lives that the three of us are attempting to greet this Gift for ourselves, yet the location helps tremendously. A fleeting glimpse of the map of Manhattan can give the impression that it is something of a chessboard: I think there is a lot to be said for that perception. The island is essentially a labyrinth, whose layout is a systematic series of crisscrossing’s that will eventually, like playing a board game, get you to the desired destination. Speak to any of my friends and they will regale you of tales testifying to this writer’s complete lack of direction. However, much to my delight, after nearly two months of walking right into the heart of this legendary city, I have yet to get lost, owing to the clarity of the city’s angular layout. I head for the Empire State Building: that’s three avenues across and 42 streets down, a distance of around two miles. Easy!

In so many ways, the city of New York as we know it in Manhattan is replicated in the process we are engaged in here; that is undertaking a novitiate. The crisscrossing’s which link everything up together into a network for traffic, pedestrians, even journeying down the East and Hudson River’s is designed so that it makes sense, or is supposed to. New York contains the highlights, the famous landmark buildings, the notable avenues, the skyline, yet lurking within is unseen poverty and the overpowering sense of isolation and fear shared my many of its residents who have been hit hard by global economic downturns, or are locked into a cycle of deprivation as if the only life known.

In a similar fashion, the novitiate is a time for breaking patterns of the former life, and constituting new ones, yet this is only really achievable when the map-work for this characteristically interior journey is to hand. We all have those landmarks to our lives- the great occasions, the celebrated friends, the memorable stories of times past, just as we all have those dark avenues where poverty can be found and where the light and truth of Christ seldom seeps through the cracks of our inner brickwork. The urban labyrinth of New York is the outer patterning of an inner labyrinth, an inner city that we, as Blessed Sacrament Novices are trying to knit together, so that Christ Eucharistic might not evade us- who it is we really are.

This all sounds tremendously daunting, even perhaps too emotive, but without recognizing interior transformations it is difficult to explain exterior habits and behaviours. As a daily existence of course, you aren’t immediately aware of these realities taking shape: it is to others, notably the Novice Master, Br. Michael Perez SSS, that all this is familiar terrain. If the three of us sense sometimes that in the middle of the city it feels more like a wilderness, Br. Michael makes for Moses- who with great passion in what he believes of the Eucharist and in both acquired and evolving knowledge of St Eymard- leads us, thankfully with oft laughter, which is heard on the Novice wing. Both he and us need that in equal measure. Laughter is an acceptance of so many things- including where we are in these formative days of Religious life.

As Novices, it was a tremendous privilege to join the brethren of the US Province (along with our own Provincial and Br. Timothy McLaughlin SSS) at the Lutz Retreat Centre in Tampa, Florida. Twenty-five degree centigrade heat in February added to the tremendous few days we spent hearing of the history of the Congregation from the moment of St Peter Julian’s death. What was intriguing about this whole affair was that information, previously documented by Fr Henri Evers SSS, had been locked within the French language, and until this point had largely unknown by non-French speakers within the Congregation. Fr De Cuers SSS as the second Superior General of the Society, it struck me, was documented as marrying his ordered and disciplined character that shaped his naval career to the organizing of the Congregation whose Founder was now absent by his death. De Cuers took seriously the commissioning of the first Eymardian biography by Fr Albert Tesniere SSS, which ensured that the Society could have a corporate sense of identity in the persona of Eymard. 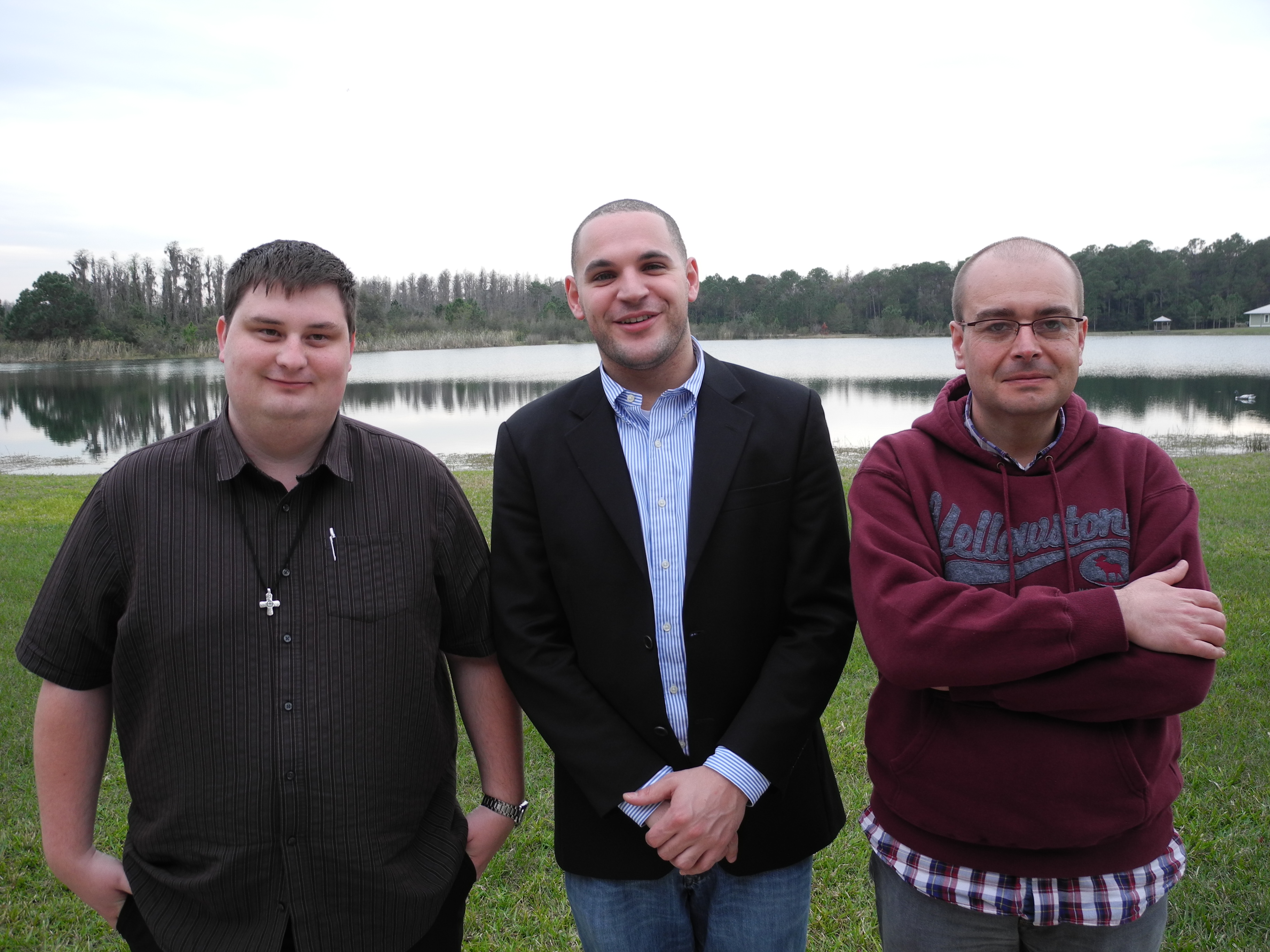 The Congregation was born out of the Paschal longing and mystery – I say longing, because it’s birth during 1856 in between the liturgical days of Christ’s Ascension and Pentecost are precisely the days when we meditate with the first Apostles on the reality of Christ’s physical absence yet await the fullness of the meaning of Jesus’ departure in light of the presence of his Spirit. It is a deeply sacramental time when absence seems to be the easiest recourse if faith in the veiled presence of Christ in his Sacrament is undermined or loses its significance. It is a time for holding fast to what faith gives us in its knowledge. Yet that is what Christ’s first Apostles endured, and what Eymard’s first disciples had to assimilate as part of the ordering of the Society born out of St Peter Julian’s Eucharistic gift of self.

What this amounts to is something of an Eastertide for the Congregation in the English speaking world. Just as the Church breaks open in the liturgy the narrative of the birth of the Church in Eastertide in the Acts of the Apostles, so Henri Evers’ text has delivered a narrative to us, which charts the story of Eymard’s spirituality being exercised within Religious life and the mapping out of our Society. As Novices it was a tremendous opportunity to be part of the unveiling of this part of the Congregation’s story that until now had been largely encased within the native language of the first brethren. The first Eymardian’s faced great challenges, yet, found great solace when they were directed to the gentle presence of St Peter Julian whose voice resonates through Fr Evers’ account.

The power of the Paschal mystery leaves nothing unturned. God takes all things as transformations for goodness. The growing pains of the Congregation marry well to the growing pains of the transformative existence of being a novice- these are expressions of conversion, and the voice which makes sense of all this is most profoundly heard in the Eucharist, where worship ritualises joy. It is where this life, sometimes and thankfully like a sitcom, is taken Eucharistically from present realities to the heart of divine life, and then it seems like perfect sense to acclaim: “Lord, it is good for us to be here” (Matthew 17: 4.)