The Holy Father Pope Francis in his apostolic exhortation Evangelii Gaudium (Joy of the Gospel) has described a striking challenge for the church in our times. He wants a Church that “goes forth”. He said that the word of God constantly shows us how God challenges those who believe in him “to go forth” (20). Because it is vitally important for the Church today to go forth and preach the Gospel to all: to all places, on all occasions, without hesitation, reluctance or fear (23). The Church which “goes forth” is a community of missionary disciples who take the first step, who are involved and supportive, who bear fruit and rejoice. These statements have become my stout foundation during my pastoral exposure (June 2014-April 2015) in Uganda, Africa. Over-all I would say, by the grace of God the experience was life-enriching and to some extent successful. There I realized that one does not need to be expert in theology in order to be effective in the mission. The mere presence of a missionary with a heart to be with the people is actually more than enough. As St. Paul in his letter to the Colossians rightfully exhorts: “and whatever you do, do it heartily, as to the Lord, and not unto men.”(Col. 3:23). Moreover, this presence must be self-initiated and generous. In my experience the call was, I have to go and find them. Activate myself and move toward others, to involve people of all walks of life which is inclusive and non-discriminatory. Having imbibed and worked in this context, significant mission success were attained.

As a theology student absorbed in theological perspective, at times I am confident and inclined to impose certain norms and practices in theology during liturgical celebrations and other religious activities in our parish in Uganda. Little did I realize that I am in a culture far different from what I used to, and far from the western character of church liturgy – defined and standardized.  In John Paul II encyclical Redemptoris Missio (#53) succinctly characteris 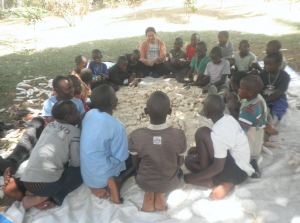 ed that “Missionaries, who come from other churches and countries, must immerse themselves in the cultural milieu of those to whom they are sent, moving beyond their own cultural limitations. Hence they must learn the language of the place in which they work, become familiar with the most important expressions of the local culture, and discover its values through direct experience. Only if they have this kind of awareness will they be able to bring to people the knowledge of the hidden mystery (cf. Rom 16:25-27; Eph 3:5) in a credible and fruitful way. It is not of course a matter of missionaries renouncing their own cultural identity, but of understanding, appreciating, fostering and evangelizing the culture of the environment in which they are working, and therefore of equipping themselves to communicate effectively with it, adopting a manner of living which is a sign of gospel witness and of solidarity with the people.” So without this respect and appreciation of the culture, it will be difficult to pursue your mission initiatives.

Typical African values are not “out-going” or extroverted personality. In my observations, unless I will approach them first with a greetings and sincere smile they will look at you as a threat or just snub your presence. Conscious to this dynamics of people and culture, I need to be sensitive and reassuring in my engagements with them. Peoples, their feelings, culture, background, state of economic well-being are paramount. Every decision, program and activity must take into account these factors because their cooperation largely depends how you deal with them. Thus, mutual respect and friendly attitude count most.

While gradually emerging myself into the African culture, I realized that the most effective path of mission is to become a Witness. I believe they put more trust in witnesses than in teachers, in experience than in teaching, and in life and action than in theories. In JP II Redemptoris Missio (#42) further explains that “the first form of witness is the very life of the missionary, of the Christian family, and of the ecclesial community, which reveal a new way of living. The missionary who, despite all his or her human limitations and defects, lives a simple life, taking Christ as the model, is a sign of God and of transcendent realities. The evangelical witness which the world finds most appealing is that of concern for people, and of charity toward the poor, the weak and those who suffer. The complete generosity underlying this attitude and these actions stands in marked contrast to human selfishness. It raises precise questions which lead to God and to the Gospel. A commitment to peace, justice, human rights and human promotion is also a witness to the Gospel when it is a sign of concern for persons and is directed toward integral human development.” The Eucharist, source and summit of our life, the beacon of our faith, has been my constant and sturdy foundation to stand as a true and faithful witness of Christ.

“The harvest is great but the laborers are few.”(Luke 10:2). True enough, missionaries of faith in Africa are rare. Understandably maybe because of the threat of malaria or ebola virus. Or maybe because of the massive discomfort of African environment and lifestyle which one could hardly withstand. But obedient to the call of our religious identity, we can’t help but to accept the challenge. “To go forth” with freedom from within is truly a joyful and fulfilling experience.

To God be the Glory!