Rome is the city chosen to host the young adult European meeting organized by the Taizé Community December 28 to January 2. An event which will bring together thousands of young people from different religions with Benedict XVI. The Taizé Community is an ecumenical religious community. Its members include Catholics, Orthodox and Protestants. It was founded by Brother Roger in 1940, in Taizé, France, when the world was divided by war.

Fr. David
Taizé Community
“The community started during the Second World War when the founder of the community, Brother Roger, arrived in Taizé with the idea of gathering a small group of men coming from different countries , different cultures, from different churches to be a sign of communion. A sign of peace”.

Currently, the Taizé Community has 1,000 religious members. Most live in the place where it was founded in France, but they are also in the slums of Brazil, Senegal, Kenya, Bangladesh and South Korea.

After Paris, Barcelona, Prague or Budapest, this meeting comes to Rome, a City with a very special significance.

Fr. David
Taizé Community
“So many Christians generation after generation have transmitted faith since the apostle. This place where giving so many have given their live for Christ, for faith. This place where the Church is alive for 2,000 years. It would be an important step in our pilgrimage of trust”.

Alongside these religious are young people from different countries who have travelled to Rome in order to prepare everything and pray in the Basilica of St. John Lateran for all who participate in the event.

ESTHER CALZADA
Volunteer, Taizé Community
“For me it is very special because I think of how so many young people are going to pray with the Pope and that actually these youth are not only Catholics. We are all Christians. But I think the kind of ecumenism there is going to be very clear.”

This is the 35th edition of the European Youth Meeting. It will be very much marked by the Year of Faith and is a foretaste of WYD Rio de Janeiro where of course the Taizé Community will participate. 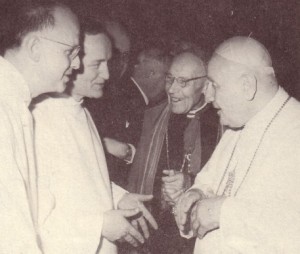 Programme of the Meeting inRome, December 28 to January 2

The next European Meeting will be held in Rome, from 28 December 2012 to 2 January 2013. The Taizé Community is preparing the meeting together with the Diocese of Rome. It will gather tens of thousands of young adults for a new stage of the “pilgrimage of trust on earth” which Brother Roger began in the late 1970s.

Participants from Europe and beyond will be accommodated with families and religious communities, both Catholic and of the other churches present in Rome and the surrounding region. They will be invited to join in pilgrimage to the tombs of the apostles and to the catacombs, to pray in the large basilicas and meet Pope Benedict XVI.

In the message he addressed to the young people gathered in Berlin for the last European Meeting, the Pope wrote, “The Holy Father wants to tell you of the joy he will have in welcoming you next year for the 35th European meeting of your ‘pilgrimage of trust on earth’. Rome will welcome you warmly!”