Year of Faith in the Archdiocese of Liverpool

Year of Faith in the Archdiocese of Liverpool 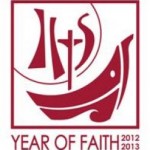 The Year of Faith will be inaugurated in the Archdiocese of Liverpool on Friday, 12 October, with a celebration of Evening Prayer with the theme ‘There was a man sent by God whose name was John’.  It will be at 7.30 pm at St Bede’s Church in Widnes. His Grace Archbishop Patrick Kelly will preside and offer a reflection.

Details of the Solemn Opening of the Year of Faith at St Bede’s church, Widnes

On Thursday, 11 October, a Solemn Mass will be celebrated in Rome; the concelebrants will include the Synod Fathers taking part in the Thirteenth Ordinary General Assembly of the Synod of Bishops, on the theme: ‘The New Evangelisation for the Transmission of the Christian Faith’. The presidents of the world’s Bishops’ Conferences will also take part together with those Fathers of the Second Vatican Council who are still alive. Celebrated on the fiftieth anniversary of the opening of the Council the Mass will mark the start of a Year of Faith called by Pope Benedict XVI with the Apostolic Letter of 11 October 2011, ‘Porta fidei’. 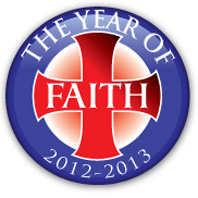 The year will come to an end on 24 November 2013, the Solemnityof Christ the King. In announcing the initiative Pope Benedict said that its aim ‘is to give renewed energy to the Church’s mission to lead men and women out of the desert in which they so often find themselves, and towards the place of life, towards friendship with Christ Who gives us life in all its fullness’. The Year will likewise be an opportunity ‘to strengthen our faith in Christ and joyfully to announce Him to the men and women of our time’, the Pope said.

See also webpage of the Pontifical Council for Promoting the New Evangelisation:-