The Vatican will mint new coins and stamps dedicated to the canonizations of John Paul II and John XXIII. But people will have to wait until the end of March to get their hands on these prized collectors’ items. 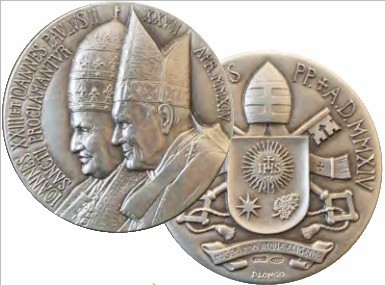 “We started with the images that people have closer to their hearts, that show the fondness of these two Popes.”

“For Pope John XXIII, we show him giving a blessing, with St. Peter’s Basilica in the back, and a full moon, a clear reference to that famous speech about the moon. Meanwhile, John Paul II is depicted with a globe behind him, also in mid-blessing, and with a mitre. We wanted to show how many people remember him, travelling to meet with the faithful, across the world.”

The newly-minted coins will be released along with the first Vatican Euro coins in 2014, which feature Pope Francis, as well as these two medallions in silver and bronze.

“John XXIII is represented with the pontifical tiara, which after his pontificate, during the pontificate of Paul VI, was never used again. He was the last one to use it. Meanwhile, John Paul II is shown with the bishop’s mitre, as the Bishop of Rome.”

Due to the nature of their unique work, this Vatican department works with the distant future in mind. But any unexpected change like a Pope’s death or sede vacante can change their plans completely.

Case and point: this coin to mark the ninth year of Benedict XVI’s pontificate, which never came to be. 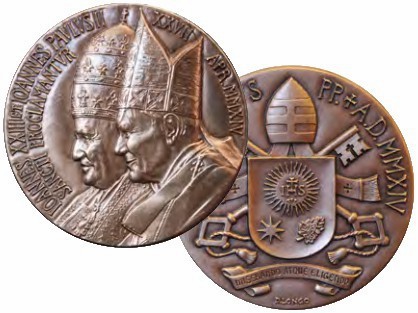 On 27 April 2014 His Holiness Pope Francis will proclaim Saints his predecessors John XXIII and John Paul II. It will mark a special moment of joy and prayer for the faithful around the world who will gather in St. Peter’s Square, but also the start of a journey to eternal glory celebrated by the Catholic Church. Blessed John XXIII is commonly known as “Good Pope John”. The name recalls not only the physical features of his face, remembered affectionately by so many faithful, but also his nature as a caring shepherd who never missed an opportunity to offer consolation with just a few simple words for those in need. His fundamental historical inspiration was to convoke the Second Vatican Council, which he strongly desired and opened on 11 October 1962. The Council marked a turning point in the Church’s history. Pope John XXIII died on 3 June 1963, and it was during the sad days of bidding him farewell that it became clear how widely he was loved and how crucial his Magisterium was.

Pope John Paul II guided the Church into the new millennium. He is considered one of the most significant and influential popes in modern history, not only by the Church, but the entire world. Here are just a few of the more prominent aspects which sum up his extraordinary pontificate: apostolic journeys around the world; commitment to ecumenical dialogue; constant defense of moral values, life and the family; his close rapport with people and especially the youth, the promulgation of the Catechism of the Catholic Church; the spirit with which he faced illness, especially during his final days.