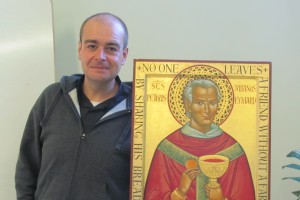 I love this time of year, always have, and I suspect always will. This season we know as Advent brings with it a particularly distinctive invitation to enter into a kind of timelessness. This timelessness can be understood in a variety of ways, but always gravitates to the same end: God’s purposes being fulfilled in and because of his love in Christ.

We are more obviously aware that we await, plan and prepare for the commemoration of Christ’s birth on the 25th December. The signs of that are all round us. Lurking in the scriptures at the commencement of the season however, is the Church’s invitation to face the unspecified time, for we know “neither the day nor hour” (Matthew 25: 13), of Jesus’ fulfilment of that love, that very force which brought him to dwell among us in time.

You might say there is something paradoxical about these days too. Our feet are on the ground, in the here and now. Yet the unknown future is always before us whilst familiar songs and seasonal smells ignite the memory that bring us back to childlike dreams of the Christmas to come. The future Pope Benedict XVI understood this same paradox by connecting the memory to hope- the inner sense of the past, with the aspiration of the future. His basic train of thought is that it is in memory that hope is awakened.

“Advent is concerned with that very connection between memory and hope which is so necessary to man. Advent’s intention is to awaken the most profound and basic emotional memory within us, namely, the memory of the God who became a child. This is a healing memory; it brings hope. The purpose of the Church’s year is continually to rehearse her great history of memories, to awaken the heart’s memory so that it can discern the star of hope…” (Joseph Cardinal Ratzinger: Seek That Which is Above 1986.)

I think all of us, who are involved in the life of our Congregation, in whatever capacity, have been mindful of the timeframe of St Peter Julian’s fiftieth anniversary of Canonization- the commemoration of which has fallen right in the heart of these Advent days. In every sense, it is a Jubilee. The Hebrews understood well Yahweh’s possession of the land. The terra firma of what God had promised would always be a kind of Advent for the people of the Old Covenant. The land was and remains important. And so, the yovel, the Jubilee, would be the opportune time, every fiftieth year, to reckon land property and slaves as dispended, with cause for rejoicing as the land, ultimately, is of God’s gift. (This fiftieth year is sacred- it is a time of freedom and of celebration when everyone will receive back their original property, and slaves will return home to their families.” [Leviticus 25: 10])

It has been a tremendous opportunity to serve a Canonical year as a Novice of the Congregation of the Blessed Sacrament during this Jubilee tide, because I think, St Peter Julian Eymard has once again come very much into view. His life, motivation, witness and passion, and ultimately his self-identity, were entirely Eucharistic. He is found there with his Lord: he is in eternity as he was in time. I can say therefore, with some confidence, that the life of the Congregation is a daily Jubilee, where the terra firma of our life meets face to face with the outpouring of God’s life in the Son of the Eucharist. It is an extremely important acknowledgement, because it is the kind of statement that will likely give ‘the’ meaning to the rest of my life.

The experience of being a novice is a strange thing. It is difficult to capture the exact words. We enrol, engage with a process, and eventually, God willing, enter more fully into the life of this charism, this gift to the Church in profession. But it is not an exact science. What I can say is that most of the work, and for certain, almost all of the energy is geared to being aware of great forces at work deep inside and entrusting yourself to them.

This hit home very powerfully to me at our Mass here at St Jean Baptiste to commemorate the Jubilee of St Peter Julian’s Canonization. As a former Anglican priest, I am also aware that my Eymardian journey is almost synonymous with being immersed in Catholic faith and life. There are two formation programmes going on here, and slowly, very slowly, they converge. However, there are times, when the inward identity of priesthood bears strongly. Witnessing the concelebrated Mass on Sunday was a great encounter for me. Internally I was touching the priesthood of St Peter Julian, yet, in reality, I am so far away. Perhaps that has been one of the chief insights of this year. I haven’t quite shaken off as much of the priestly disposition I thought I had. It is painful. Yet, here is the important thing: being able to transform that oft emptiness into something else makes the lacking into a fullness. And that something else? It is the most wonderful awareness of being part of a Eucharistic charism, which sits right at the centre of the Church’s understanding of itself, and knowing that I am connected to fellow Religious in that understanding to places I have only ever heard of. It sounds so simple, doesn’t it? But it has truly brought me to a humbler place.

This year has been in many respects about putting some flesh onto the bones of my own understanding, and realizing, like St Augustine, that conversion is the stuff of a lifetime, the ‘ever ancient- ever new.’ The former life, the memory of what was, is never that far away; but therein lurks the becoming of the new life as a son of St. Eymard, and in that becoming is the hope, as a shout- ιυζο− from the Eucharist.

Of course, despite the insight of being increasingly grafted into St. Eymard’s spiritual society across the world, εν κατηολικοι, there is the local. The locality, which, for most part is the stuff of our daily life. New York is a fascinating place. It is renowned. But, it is a city. It is a home. It was certainly a home for Thomas Merton, the contemplative who accompanied me when I undertook formation first time round in an Anglican monastic community. Merton fascinates me. Once a week I make a point of hiking up to the campus of Columbia University where he discovered Catholicism in a very concrete way. The part of Manhattan where Columbia is situated, reminds me of the architecture of the nearest city to where I grew up, Bath in Somerset.

Thomas Merton is something of a contemporary modelling of St Anthony of the Desert, the prototype, the Αββα in the history of Religious life. Both entered into a kind of interiority, but did not allow that to be the end, but actually the beginning. Both emerged after encountering a kind of inner transfiguring and allowed their personalities to be compassion. One of the herald voices of Advent cries “Comfort, comfort my people” (Isaiah 40: 1), and that it seems to me became Merton’s enduring legacy.

Into a fragmented westernised culture, Merton saw his life as a journey that was really about probing what undercuts, or rather lurks underneath our anxieties and brokenness. He believed that human beings are actively in a state of confusion. It is only by healing divisions we see on the inside of ourselves, that he reckoned there could be healing in the places and communities where we live.

This I think is where Religious life, and particularly in Eucharistic charism, is most powerful as both a means and witness to the breaking open of truths about Christ. In our locality, in our community, all of us are on the journey to go beyond how life impacts on us, rather to what connects us. To be able to extend compassion onto one of your brothers, who you know would be ecstatic if you should leave the house for a while, is a rare thing indeed, but it is done because the journey of this life, this novice life, keeps bringing us back to the Lord’s Supper, and into that gathering is the meeting of God with both the fragile and the compassionate.

There is actually no escaping this. The machine at the optician’s, which measured my eyes for the new prescription a few months ago, slowly moves around until you stare at yourself. In the faces of those with whom we share our lives, we see glimpses of ourselves as well as others. It is a very ocular existence. But, just as Jesus looked at the rich young man and loved him (Mark 10: 21), it is in the everyday gestures that Christ most powerfully reigns in this life.

The departure from New York looms in early January. Part of me has been nervous of it for some time. Why? Because it is people who make up the fabric of this life, and in an instant, you are cut off from them. Or that is what I had thought. There won’t be any goodbyes when this Canonical year is over, but actually, a welcoming. A welcoming into the same journey and further into the mystery that grafts nearly a thousand of us around the world into St Eymard’s Eucharistic friendship… Nous allons voyager!