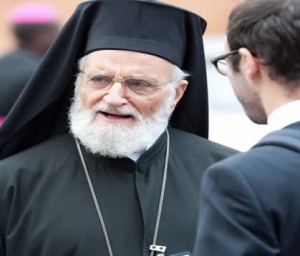 The leader of Catholics in Syria, who has sternly denounced the trade in arms fuelling the war in his country, is giving a talk in Glasgow on Monday 21st October.

Patriarch Gregorios III of Antioch will be guest of honour and keynote speaker when Aid to the Church in Need launch their ‘Persecuted and Forgotten?’ report at Christ the King, King’s Park.

The head of the Melkite Catholic Church is one of the most prominent Christian leaders in the Middle East. His has been a consistent voice calling for the protection of the area’s ancient Christian civilisation and championing peace in a region torn apart by violent conflict.

The Patriarch will be joined by Sister Hanan Youssef of the Good Shepherd Sisters based in Beirut, Lebanon. For the past two years, the Sisters have been assisting thousands of refugees fleeing the increasingly violent conflict into Lebanon.

The talks will be preceded by Mass offered by Archbishop Emeritus Mario Conti, beginning at 7pm. All welcome.