Synod on the New Evangelization 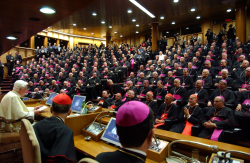 Roughly 200 bishops from all over the world will be in Romeon October 7th to take part on the Synod on the New Evangelization.

The theme is “The New Evangelization for the Transmission of the Christian faith.” The goal is for bishops to consider new ways and methods to strengthen the faith of people, especially in areas, where faith is weak or even non existent.

There are different types of participants. The main ones are the Synod Fathers, meaning cardinals and bishops. The Pope directly named 36 of them. The rest are chosen by Episcopal Conferences.

There will be 45 experts who will present their different subjects in the meetings. Another 49 of them are called observers. They will attend the meetings but they will not directly intervene.

The Synod on the New Evangelization will also bring together representatives of several movements and congregations that were formed in the last few years.

For example, Kiko Arguello, of the Neocatechumenal Way, Sister Mary Prema Pierick, superior general of the Missionaries of Charity, Maria Voce, president of the Focolare Movement and the president of Communion and Liberation, Julian Carrón.

The Synod will last until October 28th. During those three weeks, the Vatican will focus on finding new ways of bringing the Gospel and its message to the countries that need it.

Synods are a product of the Second Vatican Council.  The first one was held under Paul VI in 1967. This October meeting will mark the 21st.

There are four types of synods: ordinary, extraordinary, particular and special. The Synod on the New Evangelization falls under the ordinary category. It will be the 13th of that group and the fifth to be presided by Benedict XVI.

The ordinary Synods are those that are called on by the Pope to deal with current issues that are of concern to the entire Church.

Those that fall under the extraordinary category, deal with urgent issues that affect geographical areas. Some have taken place in Holland, Lebanon and Africa.