The Franciscan Friars invite you to join them in welcoming Saint Anthony of Padua, Priest and Doctor of the Church,  on the occasion of the 750th Anniversary of the Discovery of Saint Anthony’s Relics by Saint Bonaventure.

St Anthony will be visiting you in the form two precious relics from his Basilica in Padua, Italy. The relics will be accompanied by three friars from the Messenger of Saint Anthony in Padua and the Greyfriars of Great Britain and Ireland.

A Messenger of Hope from Padua, Italy 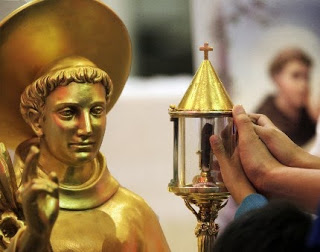 He’s the popular saint known to help people find lost items and his miracles have won him affectionate veneration among Christians and non-Christians alike.

This autumn, tens of thousands of his devotees in Ireland and Britain are expected to turn out to welcome his relics as they tour the two countries in October and early November.

The relic tour is taking place to mark the 750th anniversary of the discovery of St Anthony’s incorrupt tongue by St Bonaventure.

Padua-based Greyfriar, Fr Mario Conte, OFM Conv, who is Editor of the Messenger of Saint Anthony, will accompany the two relics – a small piece of petrified flesh and layers of cheek skin.

The magazine, which was founded in 1898, seeks to spread devotion to Saint Anthony and to promote works of charity in favour of the poor.

It has over 10,000 subscribers in Ireland alone and a similar number in the UK and is circulated in the USA, Canada, Australia, and elsewhere in the English-speaking world.

St Anthony died in 1231 and was originally buried at Sancta Maria Mater Domini Church in Padua. His remains were later moved, in 1263, to the current Basilica in the Italian city.

When St Bonaventure, who was head of the Franciscan Order at the time, presided over the opening of Anthony’s coffin, he discovered that though the rest of his body had decayed, the Saint’s vocal organs were intact, including a red and soft tongue.

“Oh blessed tongue that ever praised the Lord and led others to praise Him!” St Bonaventure exclaimed. He knew it was no coincidence as the Saint had been known as a wonderful preacher of the Gospel.

According to Fr Mario Conte, “There is nothing superstitious about relics. The real meaning of a relic is love – they are a link of love between the person who venerates and the saint.”

“St Anthony was a friar and a man who could never be content with mediocrity.” Fr James McCurry’s eyes come alive as he shares his intimate knowledge of the life of this much loved saint whose relics will soon arrive in Ireland (17th October) and will then travel on to Britain (26th October).

Although St Anthony is synonymous with the Italian city of Padua, he was in fact Portuguese; born Fernando Martins de Bulhões into a wealthy family in the capital, Lisbon on 15 August 1195. He is known the world over as the saint who helps people find lost things and lost people. During his lifetime he gained a reputation for being a strong preacher with an expert knowledge of scripture.