Sant’Egidio: “The Courage of Hope” 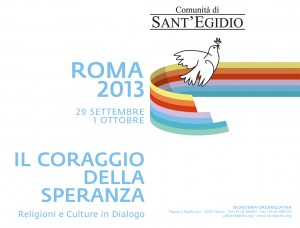 The International Meeting for Peace entitled “The courage of hope: religions and cultures in dialogue” will be held in Rome from September 29 to October 1.

From September 29 to October 1, 2013 hundreds of leaders of all religions and personalities from the world of culture and politics, from more than 60 countries, will converge in Rome at the end of September, making our city the capital of peace and coexistence, a symbol for the whole world. This is the 27th edition of the meetings, started from the historical Prayer Day in 1986 willed by Blessed John Paul II, through which Sant’Egidio has spread the “spirit of Assisi” in many European and Mediterranean countries.

On these occasions friendship, human and cultural dialogue, and prayer are intertwined with the power of the spirit. It is very valuable that men and women of religion get together, when they make an authentic encounter made of genuine dialogue and they pray side by side. Thus, the true image of a world of peace is performed: it is the civilization of living together.

More than twenty-five years of walking in the spirit of Assisi have shown how the spiritual force establishes true peace. Religions change man from within, provoking a peaceful attitude. We believe that today we must aver, with the courage of hope, that the path of dialogue is an indication for a liveable future for all. The numerous and qualified confirmations reached so far allow to draw a rich and important event, with contributions of great significance, in a time like ours, which finally shows new signs of human and spiritual recovery.

The meeting, as it is customary, will be articulated into an Opening Plenary Assembly, which will take place on Sunday, September 29 at the Auditorium “Conciliation”. Numerous panels will be held in the three sessions of Monday, September 30 morning and afternoon, and Tuesday October 1 morning, in the historical centre of the city. The Closing Ceremony of the Meeting, after the prayer meetings of the various religions, will take place on Tuesday evening, October 1, in Piazza del Campidoglio. Then the Appeal for Peace of Rome 2013 will be proclaimed.

Some of the topics of the Panels: