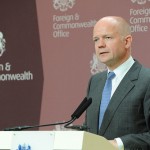 On 25 September, UK Foreign Secretary William Hague co-hosted an event at the UN General Assembly alongside Zainab Bangura, the UN Secretary-General’s Special Representative on Sexual Violence in Conflict. He spoke about his Preventing Sexual Violence Initiative (PSVI), launched in London last May. The PSVI aims to strengthen international efforts and co-ordination to prevent and respond to sexual violence in conflict, to erode the existing culture of impunity, to increase the number of perpetrators brought to justice internationally and nationally, and to support states to build capacity.

Sexual violence has long been used as a weapon against civilian populations, including refugee populations, in conflict. It is often deliberately inflicted in order to physically and psychologically injure, to humiliate, to degrade and to stigmatise individuals and communities. Rape as a war crime is prohibited under the Geneva Conventions. Yet sexual violence continues to be used actively as a weapon in conflict. We saw it in the Balkans in the 1990s. We see it now in conflict zones in parts of Africa and the Middle East, most notably Syria today. Yet  successful prosecutions of offenders have been, and continue to be, few and far between.

The objective of the UK’s PSVI is practical action: more prosecutions, better evidence to underpin judicial cases, support for survivors, the steady elimination of this horrific crime in conflict-affected countries. Mr Hague pledged an extra £1m to support Zainab Bangura’s team. We will also take forward a sustained diplomatic campaign through 2012 and the UK’s 2013 G8 Presidency to rally international attention. A new UK team of experts devoted to tackling the issue will be deployed for the first time later this year.

We have already brought the PSVI to the attention of the Holy See, and we look forward to co-operating closely with the Holy See on an issue that is central to conflict prevention and peace-building worldwide. Ultimately, of course, PSVI is about respect for the dignity and worth of the human person. This is at the heart of the 1945 Charter of the United Nations, and central to the teaching of Pope Benedict XVI and the Roman Catholic Church.