Pope plans to consecrate the world to Our Lady

Fatima statue headed to Rome, as Pope plans to consecrate the world to Our Lady 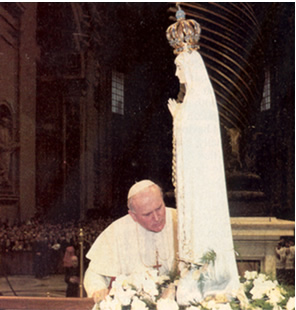 The statue of Our Lady of the Rosary of Fatima will travel all the way from Portugal to the Vatican, where His Holiness Pope Francis is planning on consecrating the world to the Immaculate Heart of Mary.

The ‘Marian Day’ ceremony, which is scheduled to take place at the Vatican on Sunday, October 13th, will be attended by hundreds of religious movements and institutions that have a special Marian devotion. This Mass is one of the last main events scheduled for the ‘Year of Faith.’

Even before that Mass, things will be busy at the Vatican. On Saturday October 12th, different prayer events are scheduled along with a pilgrimage to the tomb of St. Peter. Then on the 13th, Pope Francis will celebrate Mass in St. Peter’s Square before thousands of faithful.

The Statue of Our Lady will make its way to Rome, at the request of Pope Francis, who has shown a great devotion to Mary, since the very first day of his pontificate.

The Statue will depart from the Shrine of Fatima on the morning of October 12th. It will make its way back in the afternoon of October 13th.

Great Event of the Year of the Faith:
Marian Day

Ireland to be Consecrated to the Immaculate Heart of Mary