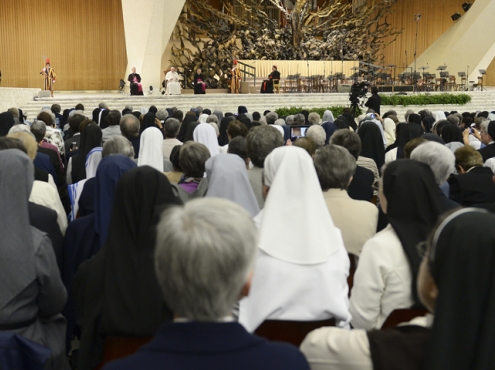 Before his speech, the Pope made some friendly remarks about the newly appointed secretary for the CONGREGATION FOR INSTITUTES OF CONSECRATED LIFE AND SOCIETIES OF APOSTOLIC LIFE.

POPE FRANCIS
“I want to thank my dear brother, Cardinal Joao Braz de Aviz for his welcoming words. I’m also quite happy to see the Secretary of the Congregation. His name is Pepe.” 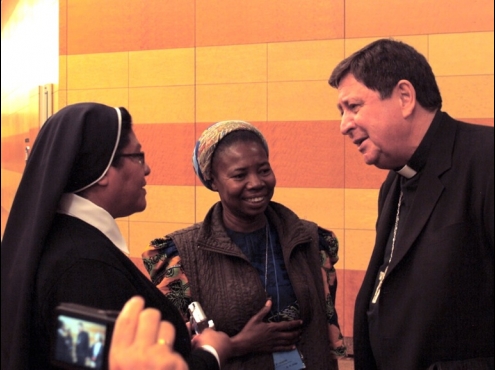 During his speech, the Pope talked about obedience, poverty and chastity. In fact, the Pope said their vow of chastity can bear fruit to spiritual children. The Pope said the consecrated are not single women, but rather spiritual mothers.

He also talked about service, adding that their goal should not be career oriented, but rather one of service. The Pope then stressed the importance of the Church, saying that one cannot separate Jesus from the Church.
POPE FRANCIS
“Rejoice, because it’s beautiful to follow Jesus. It’s beautiful to reflect the image of the Mother of God and of our Holy Mother, the Hierarchical Church.”

The theme of this conference which brought all these superiors to Rome is the service of authority, according to the Gospel.

CAREERISTS AND CLIMBERS DOING “GREAT HARM” TO THE CHURCH

“The men and women of the Church who are careerists and social climbers, who ‘use’ people, the Church, their brothers and sisters—whom they should be serving—as a springboard for their own personal interests and ambitions … are doing great harm to the Church.” This is what Pope Francis asserted in his address to the participants in the plenary assembly of the International Union of Superiors General (UISG) whom he received in audience this morning.

The pontiff spoke to the sisters of obedience, poverty, and chastity: “Obedience as listening to God’s will, in the interior motion of the Holy Spirit authenticated by the Church, accepting that obedience also passes through human mediations. … Poverty, which teaches solidarity, sharing, and charity and which is also expressed in a soberness and joy of the essential, to put us on guard against the material idols that obscure the true meaning of life. Poverty, which is learned with the humble, the poor, the sick, and all those who are at the existential margins of life. Theoretical poverty doesn’t do anything. Poverty is learned by touching the flesh of the poor Christ in the humble, the poor, the sick, and in children.”

“And then chastity, as a precious charism, that enlarges the freedom of your gift to God and others with Christ’s tenderness, mercy, and closeness. Chastity for the Kingdom of Heaven shows how affection has its place in mature freedom and becomes a sign of the future world, to make God’s primacy shine forever. But, please, [make it] a ‘fertile’ chastity, which generates spiritual children in the Church. The consecrated are mothers: they must be mothers and not ‘spinsters’! Forgive me if I talk like this but this maternity of consecrated life, this fruitfulness is important! May this joy of spiritual fruitfulness animate your existence. Be mothers, like the images of the Mother Mary and the MotherChurch. You cannot understand Mary without her motherhood; you cannot understand the Church without her motherhood, and you are icons of Mary and of the Church.”

Continuing, Pope Francis spoke to the superiors about service. “We must never forget that true power, at whatever level, is service, which has its bright summit upon the Cross. … ‘You know that the rulers of the Gentiles lord it over them … But it shall not be so among you.’—This is precisely the motto of your assembly, isn’t it? It shall not be so among you.—’Rather, whoever wishes to be great among you shall be your servant; whoever wishes to be first among you shall be your slave’.”

“Your vocation is a fundamental charism for the Church’s journey and it isn’t possible that a consecrated woman or man might ‘feel’ themselves not to be with the Church. A ‘feeling’ with the Church that has generated us in Baptism; a ‘feeling’ with the Church that finds its filial expression in fidelity to the Magisterium, in communion with the Bishops and the Successor of Peter, the Bishop of Rome, a visible sign of that unity,” the pontiff added, citing Paul VI: “It is an absurd dichotomy to think of living with Jesus but without the Church, of following Jesus outside of the Church, of loving Jesus without loving the Church. Feel the responsibility that you have of caring for the formation of your Institutes in sound Church doctrine, in love of the Church, and in an ecclesial spirit.”

“The centrality of Christ and his Gospel, authority as a service of love, and ‘feeling’ in and with the MotherChurch: [these are] three suggestions that I wish to leave you, to which I again add my gratitude for your work, which is not always easy. What would the Church be without you? She would be missing maternity, affection, tenderness! A Mother’s intuition.”