Mgr. Guido Pozzo returns to the Pontifical Commission of “Ecclesia Dei”.  A look at what really happened with the Franciscan Friars of the Immaculate 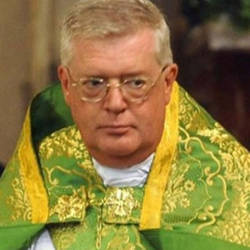 Today the Pope Francis appointed the Titular Archbishop of Bagnoregio, Mgr. Guido Pozzo, as Secretary of the Pontifical Commission “Ecclesia Dei”. Until today Mgr. Pozzo was Almoner of His Holiness. After less than a year the prelate from the northern Italian city of Trieste returns to the Pontifical Commission but this time with the added title of Archbishop. Why did the Pope decide to bring Mgr. Pozzo back to the Commission that handles the Vatican’s relations with the traditionalists and the Church’s dialogue with the Society of St. Pius X, whose 3 Cardinals seemed to have given up on the possibility of further dialogue in recent months?

The decision could be rooted in his willingness to make one final attempt to resuscitate relations with the Lefebvrians, before closing the door to dialogue definitively. Talks with the Lefebvrians have in fact ground to a halt in the last year, after Mgr. Pozzo left the Commission (chaired by the Prefect of the Congregation for the Doctrine of the Faith, Gerhard Müller and led by Vice-President Archbishop Augustin Di Noia). A part from the brief time he spent as the Pope’s Almoner, Mgr. Pozzo served the Congregation for the Doctrine of the Faith for a long time.

Meanwhile, in the traditionalist world, there is a debate going on over Pope Francis’ decision – after consultations with the Congregation for Consecrated Life – to appoint a commissioner to oversee the Franciscan Friars of the Immaculate. The dispute is over the fact that the friars will no longer be allowed to celebrate the liturgy according to the Old Rite without prior authorisation from the commissioner. Many have spoken out against this saying the Pope’s decision ignores the Motu Proprio Summorum Pontificum, with which Benedict XVI liberalised the pre-Vatican II traditional form of the Mass, allowing it to be celebrated without the bishop’s prior approval. This is not in fact the case.

The problem within the Franciscan Friars of the Immaculate is that the order’s superiors had extended the use of the Old Rite by issuing an internal circular, without voting on it first in their general chapter. Article 3 of the Summorum Pontificum states: “Communities of Institutes of consecrated life and of Societies of apostolic life, of either pontifical or diocesan right, wishing to celebrate Mass in accordance with the edition of the Roman Missal promulgated in 1962, for conventual or “community” celebration in their oratories, may do so. If an individual community or an entire Institute or Society wishes to undertake such celebrations often, habitually or permanently, the decision must be taken by the Superiors Major, in accordance with the law and following their own specific decrees and statues.”

It was the internal disagreements between the order’s members that led to Benedict XVI’s decision to order an apostolic visit. Pope Francis’ decree concludes the work started by his predecessor. The decision to order the Franciscan Friars of the Immaculate to obtain authorisation before celebrating Mass according to the Old Rite applies only to this Institute and it was taken because of the problems and tensions witnessed within it.