Pope Francis and Saint Thérèse of Lisieux:
“To depend solely on the tenderness of  God” 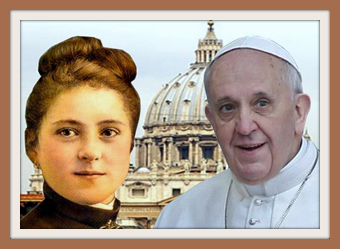 An excerpt and photo courtesy of the Sanctuaire de Lisieux from the story “Una rosa bianca da Santa Teresita” by Stefania Falasca, in the March 24, 2013 issue of Avvenire.  Translated for http://www.thereseoflisieux.org/my-blog-about-st-therese/2013/5/3/pope-francis-and-saint-therese-of-lisieux-to-depend-solely-o.html
“Do not be afraid to depend solely on the tenderness of God as Saint Thérèse of Lisieux did.”

When Cardinal Bergoglio wrote a letter, he enclosed an image of St. Therese

Anyone who had the opportunity to be in contact with and establish a friendship with Cardinal Jorge Mario Bergoglio knows that he had the habit of enclosing in his letters, no matter how short, . . . a picture of the Carmelite saint, Thérèse of Lisieux.  In this way he wanted to emphasize his personal choice, full of meaning, of the spiritual bond that united them.

At the beginning of his Pontificate, we saw Pope Francis give the President of Argentina, Cristina Kirchner, a white rose, a sign of the “little Thérèse” to whom he prays especially.

But why and from where did this fondness for Thérèse begin?

I was wondering about this very thing in Aparecida in 2007.1   At the time, I met Cardinal Bergoglio briefly in front of the Brazilian Marian Shrine between meetings of the Preparatory Committee of the final document . . .

He said to me, “Do not be afraid to depend solely on the tenderness of God as Saint Thérèse of Lisieux did, who, for this reason, is a beloved daughter of the Blessed Mother and a great missionary saint.”

It was [an invitation] to see the Church and her mission [as being] on the road of the “little way” given by his teacher of Spiritual Childhood, the way on which Pope Francis is beginning his Pontificate.

I learned a little later that, when he came to Rome, in between meetings Father would go to pray in front of a statue of Saint Thérèse of the Child Jesus in a little church run by the Franciscans in Borgo, near the Tiber.

In Buenos Aires also, his veneration of the Patroness of the Missions2  was well known by his priests, and it was spread particularly in the “villa miserias” [shantytowns, slums] of the Argentine capital [Buenos Aires].

Cardinal Bergoglio speaks in Rome about his prayer to St. Therese

But now let’s get to the roses.   Father Bergoglio had returned to Rome at the end of 2007 for the Consistory.  And with him, the figure of little Thérèse reappeared:”When I have a problem,” he said to us, “I entrust it to her.  I don’t ask her to resolve it, but to take it into her hands and help me; almost always, I receive a rose as a sign.”

“Do not be afraid to depend solely on the tenderness of God as Saint Thérèse of Lisieux did.”

He told how one time, having made an important decision about a difficult question, he put everything in St. Thérèse’s hands.  Some time later, in the doorway of the sacristy, a woman he didn’t know gave him three white roses.

He explained that it was a Jesuit, Father Putigan, who in 19253 spread a prayer seeking the intercession of St. Thérèse.  He then recited a passage from the prayer: “Little Flower of Jesus, ask God to grant me the grace that I place with confidence in your hands.”

No roses?  “A grace greater than the one you have asked for”

In the way he spoke, one felt a sense of his modesty united to a great simplicity, a sincere trust, so much so that I, too, felt moved to imitate him.  In one particular instance, following his example, I invoked the Saint, but, to my great disappointment, I received no roses.  At the first opportunity, I said to him by telephone, “Father, you remember the story of the roses…Well, nothing! Not one rose arrived for me.  Of course, this doesn’t surprise me; I understand…these things happen to those who have already attained a certain level, like you, those who are ‘in good standing.’  No one can say that I’m a model of virtue…”  The Pope was silent.  Then, in a very calm voice, he replied, “That means that she will answer you and grant you a grace greater than the one you have asked for…”  And it was really so.

1General Conference of the Latin American and Caribbean Bishops, at Nossa Senhora da Conceição Aparecida in Brazil, May 2007.