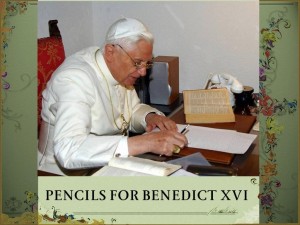 His Holiness Pope emeritus Benedict XVI always used a pencil to write his texts. Now an online campaign called Pencils for Benedict collects testimonies on how his handwritten teachings have influenced people worldwide.

Its creators explain they came up with the idea while listening to Pope Francis’ answers to journalists on the return flight from WYD.
Pope Francis then compared living with Benedict XVI to “having grandpa at home”. And so they thought about editing a book with testimonies from people all around the world.

The deadline for Testimonies is Monday, 30 September 2013, to be sent by e-mail to info@georgganswein.com

They want to give Pope emeritus Benedict the book along with a pencil case. This symbolic gift is meant to be a sign of fondness, respect and gratitude to the Pope emeritus, and also a plea to him to never give up writing.