New Pope will have Eucharistic adoration before his presentation

New Pope will have Eucharistic adoration before his presentation 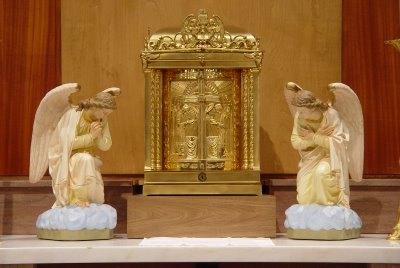 Vatican press office director Father Federico Lombardi told journalists on 11 March at the final press conference that, “when the Pope goes to the central loggia, His Holiness passes the Pauline Chapel, and will stop there for a brief moment of personal prayer and silence in front of the Blessed Sacrament.”

Regarding the acceptance if a valid election has occurred, see the “Ordo Rituum Conclavis”. Upon accepting, the one elected chooses his name and the ballots are burned to produce the white fumata.

The new Pope dresses in the papal vestments. A brief ceremony follows: Gospel reading (“Tu es Petrus” or another passage referring to the Petrine ministry), prayer, the cardinals’ act of homage, and the “Te Deum”.

The Cardinal proto-deacon goes to the Loggia of St. Peter’s Basilica and announces that the election has taken place. Meanwhile, the Pope goes to the Pauline Chapel for a short prayer before the Blessed Sacrament.

The Pope then goes to the Central Loggia for the first “Urbi et Orbi” blessing (an announcement of indulgence is made as at Christmas and Easter).

In 2005, the black fumata of the morning took place at 11:52am. The white fumata after the first vote of the afternoon occurred at 5:50pm.

From the fumata and the ringing of the bells to the Proto-deacon’s announcement about 45 minutes passed and less than 10 minutes later the new Pope appeared and gave his blessing.

Vatican Television will transmit live images of the chimney at the possible times of the fumata.

Please note that the Mass inaugurating the new Pontificate can also take place on a weekday, not necessarily a Sunday.