Looking towards the Synod

Looking towards the Synod

Amidst the media frenzy over the trial of the Pope’s butler, and betting shop speculation over the appointment of the next Archbishop of Canterbury, you could be forgiven for forgetting that the coming week will see a series of significant events and milestones: the Opening of the Synod of Bishops in Rome, the formal declaration of the Year of Faith by Pope Benedict XVI, the 50th anniversary of the Second Vatican Council, and the final visit to Rome as Archbishop of Canterbury by Dr Rowan Williams. 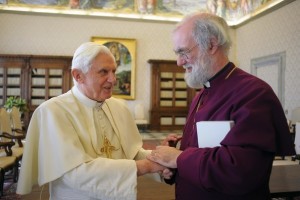 Vatican II was without doubt the most important event in the life of the Roman Catholic Church and the Holy See in the 20th century. It sent the Church in new directions, confirmed its response to tendencies already developing around it, and established a revised (and healthier) basis for ecumenical relations and relations with other faiths. This means that expectations around this month’s Synod are high. It does not have the status or the remit of a Council. But at a time of social uncertainty, economic crisis and change, many will be looking to it to chart a route for the faithful in a difficult world. Most of all, many are hoping that the Synod will lift the eyes of the Roman Catholic Church away from a focus on internal issues and up towards its global and universal horizons.

The British representation will be strong. The Archbishop of Birmingham has been appointed one of the Fathers of the Synod. There will be strong delegations from the English and Scottish Catholic hierarchies. And as well as the Anglican Fraternal delegate, the Bishop of Sheffield, representing the concerns of the global Anglican communion, the Archbishop of Canterbury will address Synod and respond to questions from delegates in an unprecedented intervention on 10 October.

All this may seem far from the principal concerns of Embassies and foreign policy practitioners. Actually, I’m not so sure. The good health of the world’s great religions, and their ability to connect in a constructive way with the modern world around us, inspiring their faithful to engage as positive and active participants in society, is relevant to all of  us who believe in stability, prosperity, and a world fit for our children to live in. Let us hope that the Synod Fathers are inspired to set such a path. And our best wishes go in particular to the British Catholic and Anglican participants of this important event.