God and the State: Europe in the midst of secularity and secularism

The annual Plenary Assembly of the Presidents of the Bishops’ Conferences of Europe will take place this year in Bratislava (Slovakia) on the occasion of the 1150th anniversary of the arrival of Saints Cyril and Methodius in Slovakian territory. For the main theme of the meeting the bishops will tackle the issue “God and the State: Europe in the midst of secularity and secularism”.
It is at the invitation of the Archbishop of Bratislava, Mgr Stanislav Zvolenský, that the Plenary Assembly of the Council of European Episcopal Conferences (CCEE) is taking place this year in Bratislava (3-6 October) at the Falkensteiner Hotel (Pilárikova ulica 5 – Bratislava). CCEE is the ecclesial continental body which brings together the Presidents of Europe’s 33 Bishops’ Conferences, the Archbishops of Luxembourg and the Principality of Monaco, the Maronite Archbishop of Cyprus, the Eparchy of Mukachevo (Ukraine) and the Bishop of Chişinău (Moldova). 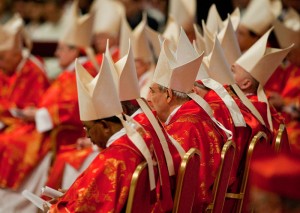 For four days, the leaders of the Catholic Church, with the help of experts, will examine the social and spiritual aspects of the challenges facing today’s Europe. The main theme of the Bratislava meeting will focus on the space left to religion, and therefore the role of the Church in the societies of the European nations today which toss and turn between secularity and secularism. The theme will be introduced by Professor Emila Hrabovec, lecturer in history, who will have the task of presenting the conclusions of research carried out among the Bishops’ Conferences. Other themes to be tackled by the Presidents include: the theme of evangelisation in a secularised world; conscientious objection; and the activities of the European Union and the Council of Europe.
The full programme for the Plenary Assembly is available here.
Attending the meeting will be the Prefect of the Congregation for Bishops (Holy See), Cardinal Marc Ouellet, and the Apostolic Nuncio to Slovakia, Archbishop Mario Giordana. Also present in Bratislava will be the General Secretary of the Symposium of Episcopal Conferences of Africa and Madagascar (SECAM); Mgr William Shomali, the Auxiliary Bishop of the Latin Patriarchate of Jerusalem; His Beatitude Ignace Youssif III Younan, Patriarch of Antioch of the Syrian Catholic Church; and a representative of the Bishops’ Conference of Kazakhstan.
The bishops gathered in Bratislava will also have the opportunity to meet the Prime Minister of the Slovakian Government, Mr Róbert Fico, and various representatives from civil and ecclesiastical institutions in the country.
From 2130 on Thursday 3 October in the Church of Saint John of Matha there will be a Vigil of Prayer for the Holy Land and Christians in the Middle East.