From red to white…

The origin and the symbolism of the Pope’s attire

From red to white

A change commonly and incorrectly attributed to Pius V 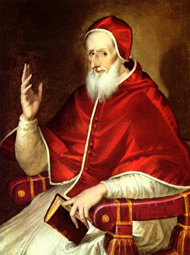 Widespread opinion has it that the white cassock the pope wears every day was introduced by Pope Pius V (1566-1572) recalling his life in the Dominican Order prior to his election to the Chair of Peter. This tale has no reliable source (not even the well documented Gaetano Moroni includes it in his dictionary of historical eclesiastical learning). Nevertheless it recurs regularly — even in the Pius V entry on Wikipedia — whenever the colours of the pope’s clothing spark public interest. This was the case from the very first day of the Pontificate of Pope Francis who has chosen to continue to wear the traditional white cassock while abandoning the red mozzetta, or elbow-length cape.

That Pius V was not the pope to introduce the white cassock may be noted simply by comparing Raphael’s portrait of Julius II (1503-1513) with El Greco’s of Pius V. As regards the white and red papal attire, the two portraits are identical.

This leads to the question: when were the red and white papal robes introduced? What do the historical sources tell us and how should we interpret them?

To learn more about this we must go back in time to the pontificate of Sylvester II (999-1003), Pope in the year 1000. Indeed, we learn that Arnulf of Orleans accused him of sitting “on the sublime threshold wearing a vestment radiating purple and gold”. We do not know whether the Pope was truly clad in the red mantle at the moment of his election or whether it was a rhetorical reference to the Donation of Constantine, which states that the Emperor had donated “some imperial raiment” to Pope Sylvester I (314-335), including the “purple cloak”. It is certain that also for Peter Damian, one of the major protagonists of the Gregorian Reform, the red mantle identified the papal office.

The first pope to be solemnly invested with the red mantle immediately after his election was Gregory VII (1076). Towards the end of the century, the ordines [Ordinals] of both Albino (1189) and of Cencio (1192)point out that immediately after the pontiff’s election, the archdeacon or prior of the deacons mantled him with the red cope. In all these sources, therefore, the mantling [immantatio] is the ritual element that makes the legitimate candidate to pontifical dignity visible.

These sources, however, tell us only about the pope’s red cloak and never mention the white cassock. This is another curiosity in the history of papal attire. In fact it was not until the late 13th century that a manual came out (the Ordo XIII, which Pope Gregory X had had compiled in about 1274) that explicitly mentioned the Pope’s white cassock. Since then all the Roman Pontifical manuals were to describe in ever greater detail that from the moment of his election the Pope put on vestments of two colours: red (cope, mozzetta, shoes); and white (cassock, socks).