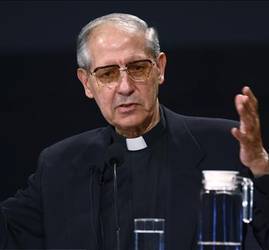 Fr. Antonio Nicolas (Superior General of the Society of Jesus since 2008) is the new President of the Union of Superiors General. The USG represents the superiors general of more than 200 male religious institutes.

In 2006 and 2009, when the Vatican would not do anything its Salesian Secretary of State, Tarcisio Bertone was not okay with, his fellow Salesian Fr. Pascual Chávez Villanueva, Rector Major of the Society of St. John Bosco, served two mandates as head of the Union. Not long after the first Jesuit in history was elected Pope, the world leader of the Society of Jesus has now been appointed as head of the USG.

Up until now, Fr. Nicolas was Vice President of the Superiors General and replaces the Franciscan José Rodriguez Carballo (the organisation’s top man for just one year), who was appointed Secretary of the Vatican Congregation for the Institutes of Consecrated Life and Societies of Apostolic Life. The new Vice President will be elected during the General Assembly which has been scheduled for November. The Union of Superiors General is an institution of pontifical right, founded by the Congregation for Religious.

Its purpose is to promote the life and mission of individual institutes that work in service of the Church, so as to make their collaboration more efficient and contact with the Holy See and the hierarchy more fruitful.” All superiors general of religious institutes or societies of apostolic life of pontifical right are members of the UISG. Superiors general of institutes of diocesan right can join the Union as adjunct members. The USG’s supreme body is the general assembly which is required to meet at least once a year. It is responsible for electing the USG council, which acts as an executive body, comprising a president, vice-president and ten advisors. The superiors general, who are members of the USG, hold an assembly twice a year to discuss problems and issues of common interest. The USG also works through the various Commissions, some of them permanent, others established ad hoc basis.

Fr. Nicolas is nicknamed the “black pope” because of the colour of his cassock, because he has been elected to his position for life, just like the Pope and because as the Jesuit superior, he is the leader of the largest and most powerful religious institute. His long experience in Asia – a land that is proving fertile for evangelisation – and his ability to “govern” are qualities the Society of Jesus sought in January 2008 when Fr. Nicolas was appointed as leader of the world’s 19,200 Jesuits. His training and pastoral experience were gained in Asia, especially Japan.

The Spanish theologian is the second out of the institute’s 29 successors to come from the Land of the Rising Sun, after the missionary Pedro Arrupe (one of the witnesses of the Hiroshima tragedy). Fr. Nicolas was born in Palencia, Spain, in 1936. He has a degree from the PontificalGregorianUniversity, and in 1971, completed his Master of Sacred Theology at SophiaUniversity in Tokyo, where he went onto become a professor of Systematic Theology. He was director of the Pastoral Institute in Manila from 1978 to 1984 and, between 1991 and 1993, he was rector of theologate in Tokyo. He was Provincial of the Jesuit Province of Tokyo between 1993 and 1999.

The, between 2004 and 2007, the new “black pope” was President of the Jesuit Conference of Provincials for Eastern Asia and Oceania. He is highly esteemed within the Society of Jesus and the Vatican, partly because of the good job he did as Secretary of the last General Congregation of the Society of Jesus. During the meeting, Fr. Kolvenbach managed to ensure the Jesuits returned to more moderate positions.

Father Nicolás President of the USG. Father David, secretary general of the USG, the Union of Major Superiors, wrote on 30 April: “Dear Superiors General, I am happy to inform you that, in line with clause 18 of our Statutes, Fr Adolfo Nicolàs SJ has agreed to replace Fr José Rodriguez Carballo OFM as President of the Union “ad complendum triennium”.  We will proceed to the election of the new Vice-President during the assembly of May 22 to 24 next. We thank Fr Nicolàs wholeheartedly for his spirit of availability and we accompany him with our prayer.”