Over 100 former Anglicans from the British Isles concluded a pilgrimage to Rome Feb. 24 in thanksgiving for the creation of the Personal Ordinariate of Our Lady of Walsingham.

“It has been quite poignant because almost all of the people who are with me were not Catholics until Easter last year,” Monsignor Keith Newton, the head of the U.K. ordinariate told CNA on Feb. 24. 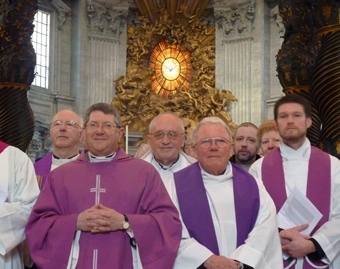 The ordinariate was established last year by Pope Benedict XVI to give Anglicans the possibility of entering into communion with the Catholic Church while still preserving their “distinctive Anglican patrimony.”

“Now they have come to the center of Catholicism, they’ve come to the tombs of Sts. Peter and Paul to pray and to give thanks, and I think they’ve been genuinely moved by this, really,” Msgr. Newton said of his fellow pilgrims.

The Personal Ordinariate of Our Lady of Walsingham already has 57 priests and over 1,000 members throughout England, Wales and Scotland. This Easter it will receive another 200 lay people and 20 priests into the Church.

and other members of the Personal Ordinariate of Our Lady of Walsingham pose in St. Peter’s Basilica

“‘Wonderful’ is not a strong enough word to express what we all feel at being together here,” said Father Len Black, the homilist at a Feb. 24 morning Mass in St. Peter’s Basilica. Fr. Black was a Scottish Episcopalian minister for 30 years.

“I am certain that, like me, this week you have all experienced the feeling of coming home,” he told the congregation in the basilica’s Chapel of St. Joseph.

“Nowhere can we truly experience this other than being here, so close to the place where the apostle Peter gave his life for the faith and where his successors have guarded the faith for generations.”

On Wednesday the group was personally welcomed by Pope Benedict XVI during his weekly audience in the Vatican’s Paul VI Hall. In return the pilgrims stood and sang the hymn “Praise to the Holiest,” which was composed by Blessed John Henry Newman. The 19th century Anglican cleric turned Catholic cardinal is the ordinariate’s patron.

“I think our musical heritage is as strong part of our patrimony,” said 28-year-old Michael Vian Clark to CNA after today’s Mass. He became Catholic in 2007 and is now the Director of Music at Buckfast Abbey in Devon, England. His highlight of the week was attending Mass at the basilica of San Giorgio in Velabro, which was Cardinal Newman’s titular church in Rome.

“It was very, very moving for us to celebrate Mass there with some of the texts Blessed John Henry might have known, but also, importantly, to use two of his hymns as the offertory and post communion, which was really moving and touching in that particular place.”

He said that even though Bl. John Henry Newman “would not have thought that would ever be possible … here we are and it happened.”

With little money and no church buildings being given to them by the Bishops of England & Wales, it seems to have been a difficult but happy first year for the U.K. ordinariate.

“We’ve had to live by faith and, in the end, God has provided,” said Msgr. Newton.

“None of us are hungry, none of us have nowhere to live. God will provide, and I think we’ve just got to trust him.”