On the evening of the 24th May, Mons. Fr. José Rodriguez Carballo, OFM, celebrated a thanksgiving Mass at the O.F.M. General Curia. For this Holy Mass were present friars members of the House dependent of the Minister General, together with friends and people who frequent the Church of Santa Maria Mediatrice. Concelebrating with him, among others, there was the new Minister General Fr. Micheal Perry, OFM, Fr. Marco Tasca, OFM Conv, and Mgr. Félix del Blanco.

At the beginning of the Mass the Minister General Fr. Micheal Perry, OFM welcomed Mons. José and thanked him for the service he gave to the Order and now as an archbishop, the service that he is going to give to the whole Church. During the homily Mons. José thanked God for the gift of the Episcopal Ordination and the joy of the new service as Archbishop and as a friar that will surely be of great help to accomplish his mission in the Congregation of Consecrated life.

At the end of the Mass the Fr. Guardian in the name of the friars of the General Curia presented to him with an Episcopal Cassock. 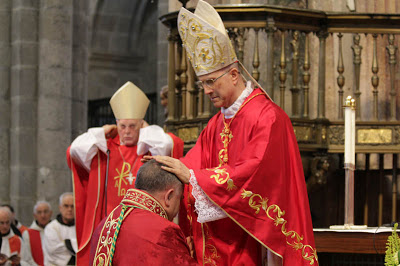 A Special Edition that focuses on the Episcopal Ordination of Mons. Fr. José Rodriguez Carballo, OFM. This Special Edition is available in four languages: English, Spanish, Italian and French.

Cardinal Bertone’s Homily at Episcopal Ordination of Friar José Rodríguez Carballo, O.F.M., Secretary for the Congregation for Institutes of Consecrated Life and Societies of Apostolic Life