Could what Bishop Hugh offers be of assistance to us?

Create a space for silence, Bishop Hugh Gilbert tells us

Silence is misunderstood by so many people today. Some friends and family think that being silent is horrible, or that it is a punishment for something. Silence may have been used as a weapon, but in reality, it is not and silence ought not be used as such, ever. The new bishop of Aberdeen (Scotland), Hugh Gilbert, delivered his first pastoral letter on the subject of silence. As a Benedictine he is attune to the contours of silence as Saint Benedict exhorts followers of his Rule for Beginners to live in an atmosphere of silence. Could what Bishop Hugh offers be of assistance to us? 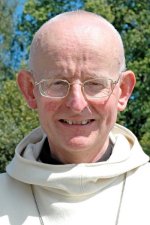 The Danish philosopher Kierkegaard once wrote: ‘The present state of the world and the whole of life is diseased. If I were a doctor and I were asked for my advice, I should reply: “Create silence! Bring people to silence!” The Word of God cannot be heard in the noisy world of today. And even if it were trumpeted forth with all the panoply of noise so that it could be heard in the midst of all the other noise, then it would no longer be the Word of God. Therefore, create silence!’

‘Create silence!’  There’s a challenge here. Surely speaking is a good and healthy thing? Yes indeed. Surely there are bad kinds of silence? Yes again. But still Kierkegaard is on to something.

There is a simple truth at stake. There can be no real relationship with God; there can be no real meeting with God, without silence. Silence prepares for that meeting and silence follows it. An early Christian wrote, ‘To someone who has experienced Christ himself, silence is more precious than anything else.’ For us God has the first word, and our silence opens our hearts to hear him. Only then will our own words really be words, echoes of God’s, and not just more litter on the rubbish dump of noise.

‘How silently, how silently, the wondrous gift is given.’ So the carol goes. For all the noise, rush and rowdiness of contemporary Christmases, we all know there is a link between Advent and silence, Christmas and silence. Our cribs are silent places. Who can imagine Mary as a noisy person? In the Gospels, St Joseph never says a word; he simply obeys the words brought him by angels. And when John the Baptist later comes out with words of fire, it is after years of silence in the desert. Add to this the silence of our long northern nights, and the silence that follows the snow. Isn’t all this asking us to still ourselves?

A passage from the Old Testament Book of Wisdom describes the night of Israel’s Exodus from Egypt as a night full of silence. It is used by the liturgy of the night of Jesus’ birth:

‘When a deep silence covered all things and night was in the middle of its course, your all-powerful Word, O Lord, leapt from heaven’s royal throne’ (Wis 18:14-15).

‘Holy night, silent night!’ So we sing. The outward silence of Christmas night invites us to make silence within us. Then the Word can leap into us as well, as a wise man wrote: ‘If deep silence has a hold on what is inside us, then into us too the all-powerful Word will slip quietly from the Father’s throne.’

This is the Word who proceeds from the silence of the Father. He became an infant, and ‘infant’ means literally ‘one who doesn’t speak.’ The child Jesus would have cried – for air and drink and food – but he didn’t speak. ‘Let him who has ears to hear, hear what this loving and mysterious silence of the eternal Word says to us.’ We need to listen to this quietness of Jesus, and allow it to make its home in our minds and hearts.

‘Create silence!’ How much we need this! The world needs places, oases, sanctuaries, of silence. 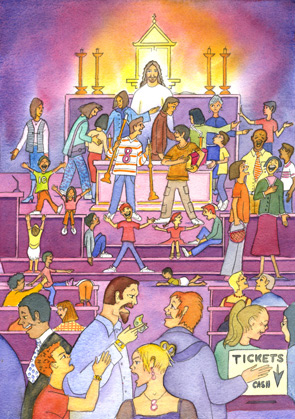 And here comes a difficult question: what has happened to silence in our churches? Many people ask this. When the late Canon Duncan Stone, as a young priest in the 1940s, visited a parish in the Highlands, he was struck to often find thirty or forty people kneeling there in silent prayer. Now often there is talking up to the very beginning of Mass, and it starts again immediately afterwards. But what is a church for, and why do we go there? We go to meet the Lord and the Lord comes to meet us. ‘The Lord is in his holy temple. Let all the earth keep silence before him!’ said the prophet Habakkuk. Surely the silent sacramental presence of the Lord in the tabernacle should lead us to silence? We need to focus ourselves and put aside distractions before the Mass begins. We want to prepare to hear the word of the Lord in the readings and homily. Surely we need a quiet mind to connect to the great Eucharistic Prayer? And when we receive Holy Communion, surely we want to listen to what the Lord God has to say, ‘the voice that speaks of peace’? Being together in this way can make us one – the Body of Christ – quite as effectively as words.

‘Create silence!‘ I don’t want to be misunderstood. We all understand about babies. Nor are we meant to come and go from church as cold isolated individuals, uninterested in one another. We want our parishes to be warm and welcoming places. We want to meet and greet and speak with one another. There are arrangements to be made, items of news to be shared, messages to be passed. A good word is above the best gift, says the Bible. But it is a question of where and when. Better in the porch than at the back of the church. Better after the Mass in a hall or a room. There is a time and place for speaking and a time and place for silence. In the church itself, so far as possible, silence should prevail. It should be the norm before and after Mass, and at other times as well. When there is a real need to say something, let it be done as quietly as can be. At the very least, such silence is a courtesy towards those who want to pray. It signals our reverence for the Blessed Sacrament. It respects the longing of the Holy Spirit to prepare us to celebrate the sacred mysteries. And then the Mass, with its words and music and movement and its own moments of silence, will become more real. It will unite us at a deeper level, and those who visit our churches will sense the Holy One amongst us.

‘Create silence!’ It is an imperative. May the Word coming forth from silence find our silence waiting for him like a crib! ‘The devil’, said St Ambrose, ‘loves noise; Christ looks for silence.’

Yours sincerely in Him,
+ Hugh, O. S. B.
Bishop of Aberdeen