Collection of Masses of the Blessed Virgin Mary Republished

Collection of Masses of the Blessed Virgin Mary Republished 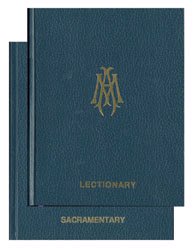 In the decree of promulgation, he wrote, “Because of the great number of requests from pastors and the faithful and especially from rectors of Marian shrines, it seemed opportune to publish a collection selected from existing Marian Mass formularies, many of which are outstanding for their teaching, piety, and the significance of their texts.”

Some of those texts, though far from all, are also now found in the Roman Missal, Third Edition. Many others come from various Marian shrines around the world. Given the popularity of the Collection (the English translation was approved in 1990 by the Congregation), it seemed opportune to reprint it in light of the new Missal. A complete revision of the translation is not currently foreseen, so the Congregation, in a letter dated July 19, 2011 (Prot. n. 692/11/L), gave permission to reprint Volume I of this Collection (the Missal) with necessary updates so that it conforms to the text of the Roman Missal, Third Edition. This reprint will be provided with the following updates:

Catholic Book Publishing Company and Liturgical Press, both of whom published the Collection previously, will also publish this reprint. It is expected that the text will be ready for purchase and shipping by September 2012.