CENTENARY OF THE BIRTH OF POPE JOHN PAUL I

CENTENARY OF THE BIRTH OF THE SERVANT OF GOD 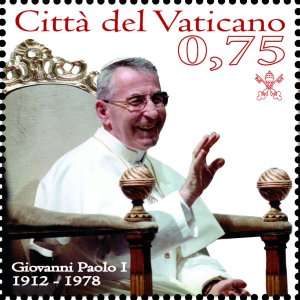 Pope John Paul I (Albino Luciani, Born at Forno di Canale (Belluno), (actually at Canale d’Argordo), son of Giovanni Luciani and Bortola Tancon; was baptized the same day at home, by the midwife, as he was in danger of death.

This year marks the centenary of his birth, and the Vatican Philatelic Office pays tribute to the “Pope of Smiles” with the issue of a stamp depicting his face in one of these affectionate expressions.

He entered the seminary of Feltre in 1928, was ordained a priest on July 7, 1935.  On December 15, 1958, he was nominated Bishop of Vittorio Veneto by Pope John XXIII. During these years as Bishop he developed the conviction of the need in the pastoral mission of catechesis for all. He actively participated in the Second Vatican Council (1962 – 1965).  On 15 December 1969 Pope Paul VI nominated him Patriarch of Venice, and he was created a cardinal March 5, 1973. He left Venice for the last time for the conclave that elected him Pope, 26th August, 1978.  His Pontificate lasted only thirty-three days. Because his words were to come to everyone’s heart, people loved him. 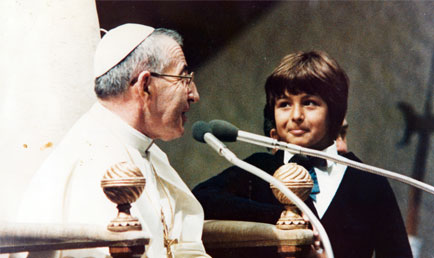 October 17, 2012,  will mark the 100th anniversary of the birth of the Servant of God Pope John Paul I.  During that same week, on October 11, the Church will commemorate the 50th anniversary of the opening of the Second Vatican Council and will open the Year of Faith promulgated by His Holiness Pope Benedict XVI. The same month of October will also see the Synod on the New Evangelization. 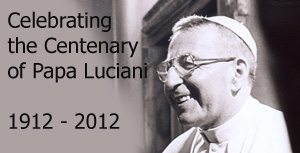 This convergence of events seems providential because Papa Luciani’s life as a priest and bishop was dedicated to furthering the Catholic faith through evangelization, and purifying it through holiness of life. Above all, his efforts were directed toward fulfilling the aims of Vatican II for the advancement and renewal of the faith in the life of the Church.