Below is the letter written by Secretary of  State, Tarcisio Cardinal  Bertone, to the convents and monasteries of contemplative life worldwide, in the lead up to Pope Benedict XVI’s resignation and conclave. 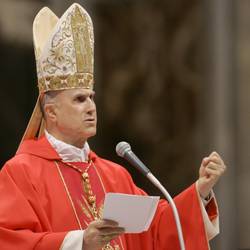 I write to you as the whole Church anxiously follows the final days of the luminous pontificate of His Holiness Benedict XVI and awaits the arrival of the successor whom the Cardinals gathered in conclave and guided by the Holy Spirit will choose, after discerning together the signs of the times of the Church and the world.
His Holiness Benedict XVI has asked all the faithful to accompany him with their prayers as he commends the Petrine ministry into the Lord’s hands, and to await with trust the arrival of the new Pope. In a particularly urgent way this appeal is addressed to those chosen members of the Church who are contemplatives. The Holy Father is certain that you, in your monasteries and convents throughout the world, will provide the precious resource of that prayerful faith which down the centuries has accompanied and sustained the Church along her pilgrim path. The coming conclave will thus depend in a special way on the transparent purity of your prayer and worship.
The most significant example of this spiritual elevation which manifests the most authentic and profound dimension of every ecclesial action, the presence of the Holy Spirit who guides the Church, is offered to us by His Holiness Benedict XVI who, after having steered the barque of Peter amid the waves of history, has chosen to devote himself above all to prayer, contemplation and reflection.
The Holy Father, with whom I shared the contents of this letter, was deeply appreciative, and asked me to thank you and to assure you of his immense love and esteem.
With affection in Christ I send you greetings, united with you in prayer.