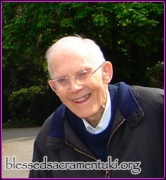 THE Province of Saints Peter and Paul (Great Britain-Ireland) announces with deep sorrow the death of BRO. FRANCIS BARKER, SSS. He died peacefully last 6th of July 2008 at the age of 85.

Brother Francis is assigned at our Liverpool community at the time of his death. He was born on 29th March 1923. He made his profession in the Congregation of the Blessed Sacrament on the 8th of September 1977.

Rule of Life Number 13 of the Congregation of the Blessed Sacrament says ” Comforted by the prayer of the community and by the Eucharist received in viaticum, our brothers will then be ready to die in the Lord.”

“The death of a brother shall be celebrated as a paschal event, in a prayer filled with hope. We will faithfully carry out the prescribed suffrages for our deceased.”

The funeral Mass for Bro. Francis is on Tuesday, July 15, 2008, 1.15 pm at the Blessed Sacrament Shrine, Dawson Street, Liverpool, England.

Let us pray for the eternal repose of the soul of Bro. Francis.