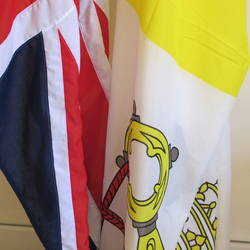 Interview with the British Ambassador to the Holy See, Nigel Baker, the only Vatican diplomat who keeps a blog

1) Now that you have been working in the Holy See for a few months, what is your view of the Vatican?

I arrived in September last year. My experience has been positive. I have found doors open to the British Ambassador. All those working with the Holy See, from members of the College of Cardinals to officials in different dicasteries have been very welcoming. Two things in particular have struck me as I have moved from being an outside observer to becoming an ‘insider’. The first is the extraordinarily broad scope of work and activity going on here. Any given day can require me to engage on issues as diverse as migration and trafficking, ecumenical relationships, inter-religious dialogue, climate change, or conflict in different parts of the world. The second is how few people there are, at the centre, to manage all these issues on behalf of the Holy See. The Secretariat of State and the dicasteries, and other organisations like Caritas Internationalis, have small staffs. People are working hard. Occasionally there are signs of overstretch. I am not surprised. And I can see why the Holy See insists on the importance of subsidiarity – if only to make sure that those in the field take their share of the burden!

2) Over the past weeks the Holy See has been struggling with the Vatileaks crisis which follows the Wikileaks scandal involving the U.S. government. Has the Foreign Office had to deal with anything like this in the past? How do you think the Holy See should react?

I think that “leaks” of information are a fact of life for any government. We have them in Britain too. There is always the balance to be struck between freedom of information and transparency, and the confidentiality necessary for the conduct of diplomatic or government business. Unfortunately, there is also a seemingly endless media market for ‘insider gossip’, from whatever source. In the case of wiki-leaks, I was struck by how little recognition there was from those involved that their actions might damage the very cause they claimed to wish to support, that of greater transparency in government business. People who leak information, especially if they do so for money or motives of disloyalty, must be prepared to take responsibility for their actions.

3) How would you describe relations between Britain and the Holy See?

After his visit to theVatican in February, as part of a seven-strong delegation of British government ministers, Lord Howell told Parliament last month that “the United Kingdom’s relations with the Holy See are strong and substantive”. He added: “Given that the Holy See is one of the world’s oldest organisations, at the centre of a truly global network, we believe that it is important to maintain and develop a substantive diplomatic dialogue with theVatican… the Holy See is an important actor in international affairs”. I don’t think I can improve on that! Our relations are good. We have maintained the momentum in our relations since the historic and successful visit of Pope Benedict XVI to Britain in 2010, and we will continue to build.

4) You are the only diplomat accredited to the Holy See who has a blog, but you are not the only British diplomat who has one. Could you tell us why you keep a blog?

There is an extensive network of British diplomatic bloggers. This is encouraged by the Foreign Office. I started a blog when I was ambassador to Bolivia, in order to reach out to Bolivians who might not read the newspapers or follow diplomatic events, but who were engaged in the new media and did have an interest in Britain. Here, my motivation is slightly different. Many of my compatriots, when I was posted, asked me what an ambassador to the Holy See did. My blog is a way of answering that very fair question, and casting a little light on what, for many people, is an arcane world. If I can get across a few other messages along the way, all the better. A diplomat is always going to be a bit limited in what he can say in a public blog. But I hope mine will be of sufficient interest to the readers of ‘Vatican Insider’ for them to bookmark this page.

5) Diplomatic work is usually associated with behind the scenes operations: what is the use of a blog? Could you give us an example?

I think the modern diplomat needs to be in the communications business. He needs to listen, and to transmit. Of course, there are times when the curtains must be closed. But in a globalised world, where new media like Facebook, Twitter, and the Internet play such an important role in public life, diplomats too need to use these most modern means by which to explain their actions and engage with the public they serve. Perhaps a good specific example is my blog back in March for International Women’s Day , in which I highlighted an event held amongst Holy See ambassadors to consider ways of tackling human trafficking. This was not a “media” event. But the blog gave an opportunity both to give profile to the issue, and to explain what we were trying to do about it. I would be delighted to hear from ‘Vatican Insider’ readers thoughts on what they would like to read in my posts.