Archbishop Welby: no sacrifice too great to obey Christ’s call to unity

Archbishop Welby: no sacrifice too great to obey Christ’s call to unity 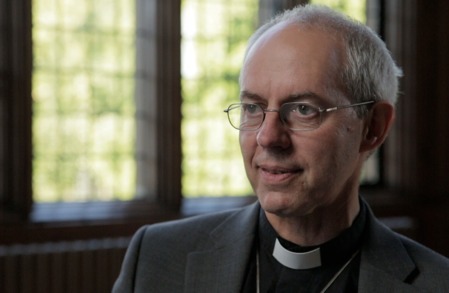 The head of the Anglican Communion, the Archbishop of Canterbury Justin Welby, said he hopes to “produce a few surprises” with Pope Francis in terms of ecumenical relations between the two churches, but declined to disclose any details.

The Archbishop made the comment in an interview with Vatican Radio’s Philippa Hitchen at the 10th Assembly of the World Council of Churches, currently underway in Busan, South Korea.

He also reflected on the challenges and concessions that need to be made for the sake of Christian Unity. The longer Christians “exist in different church communities around the world,” he said, “the more our different communities embed their own institutions and put down roots.”

“Perhaps we need to reimagine what it means to look like the church and to surrender some of the things that give us our sense of identity in the cause of Christ,” he said.

The churches need to be sure they are working on the important doctrinal and dogmatic differences between them “in the context of churches and ecclesial communities that say no sacrifice is too great to be obedient to the call of Christ that we may be one,” he said.

Read a transcript from the interview below:

Q.: This is your first WCC Assembly. How important do you see the role of the WCC today?
Archbishop Welby: It’s my first experience, so I’m very much here learning. I think the first thing that struck me is the breadth and scale of the church and I think one of the things that the WCC does is bring together every point of the church, many of which disagree quite strongly, but you get a sense of the breadth and the depth and the width of the work of Christ across the world and that’s extraordinarily impressive.

Q.: The WCC is sometimes criticized for being a celebration of difference and diversity, and yet you received loud applause when you talked about the commitment to full, visible, sacramental unity?
Archbishop Welby: I think the longing for the union of Christ’s church comes from the work of the Holy Spirit rather than from us generating it. I think it is a gift of the Spirit and that longing is deepening and growing but, as you say, the diversity of our world is reflected more and more in a universal church and it becomes harder and harder to overcome the obstacles. The danger is that you end up in some kind of soup where everything goes mushy. But the other side is that we learn what it is to love one another in diversity, yet holding to the one Lord Jesus Christ as the centre of our lives, the one we follow, the one to whom we are disciples.

Q.: You said recently that most of our disagreements are about power and prestige rather than dogma or doctrine. What exactly do you mean?
Archbishop Welby: …We exist in different church communities, different ecclesial communities around the world and the longer that goes on, the more our different communities embed their own institutions and put down roots. Some of them have been putting down roots for centuries and that makes it harder and harder for us to say, well, actually, perhaps we need to reimagine what it means to look like the church and to surrender some of the things that give us our sense of identity in the cause of Christ. There are very fundamental and extremely important doctrinal and dogmatic differences that we have between us and they have to be worked on, as they are with Rome and the Anglicans with ARCIC, and we take those extremely seriously. It’s absolutely essential that those are worked on. But we need to make sure we’re working on them in the context of churches and ecclesial communities that say no sacrifice is too great to be obedient to the call of Christ that we may be one.

Q.: … Neither you nor Pope Francis seems remotely interested in power and prestige. Does this mean therefore that we can expect some kind of surprising healing or reconciliation in the near future?
Archbishop Welby: God has given you, and given us all, a great Pope. And he’s a great Pope of surprises… and I think people are inspired and uplifted by what they see in Pope Francis, as I am. I think he’s a wonderful person. Surprises? Yes, I think there’ll be one or two surprises. We’re hoping to produce a few surprises.

Q.: You announced a few interesting joint initiatives on that last visit, and you’re due back again in the spring. Can you give us any hint, any teaser of what we can expect on this next visit?
Archbishop Welby: No, absolutely not!

Q.: You’ve also visited Japan and Hong Kong here in Asia – how do you see the role of the minority Christian churches in this region?
Archbishop Welby: Christians are a very small minority in Asia, but there are one or two characteristics of Anglican churches, one of which is they are bridge churches—they build bridges. Secondly, they educate, there are 150,000 children in Hong Kong being educated in church schools. In Japan, the church is profoundly and deeply involved with the communities affected by the tsunami and Fukushima disasters and are working in beautiful ways in serving those communities at the very grassroots with the people who others are not reaching out to, so poor church for the poor and I rejoiced at that.

Q.: Do you see this WCC theme of justice and peace central to your ministry?
Archbishop Welby: I hope the central theme of my ministry begins with prayer, and my own engagement with the love of Jesus and our call to be a people of love who serve the poor – I think all those wind in together. The WCC Assembly theme is central to Christian ministry but it isn’t the whole of Christian ministry.

Q.: You’ve also been dealing recently with divisions with your own Anglican communion. You met with leaders at the second GAFCON encounter of traditionalist Anglican bishops in Kenya. How concerned are you about the deep differences of vision within the Anglican world?
Archbishop Welby: The trip to Kenya was wonderful. I went principally to express my solidarity with people and churches in Kenya, following the terrorist attack in Nairobi. It happened to be the weekend leading into the GAFCON meeting, and I met their leaders and that was a great privilege. The Anglicans have always conducted their disagreements very openly, publically, loudly. I rejoice in groups, like GAFCON, with many other across the church, with lots of different perspectives, which call us in particular directions and remind us of the breadth and depth of Christian commitment that we need. So, I’m grateful that they force me back to think and I listen to all of them.

Q.: Regarding the issue of women bishops, you now have new draft legislation that will be discussed at the General Synod in November. How is this different from the previous attempt, which failed so dramatically a year ago?
Archbishop Welby: You’ll have seen the papers. What we’ve got here is a straightforward and simple measure, which sets out some basic principles of how we operate as a church, reinforced by an ombudsman scheme, so that people who feel we’re not living by the principles we’ve set out have a recourse. So, we’ll have to see if the synod also thinks it’s the right way to go. I do hope, more than optimism.

Text from page http://en.radiovaticana.va/news/2013/11/01/archbishop_welby:_no_sacrifice_too_great_to_obey_christ’s_call_to/en1-742687
of the Vatican Radio website

See also: Papal Message to the World Council of Churches:-