Archbishop Tartaglia: ‘new Pope will give us joy and confidence’

Most Reverend Philip Tartaglia, Archbishop of Glasgow and President of the Bishops’ Conference of Scotland expressed his joy at the election of Pope Francis. He said: 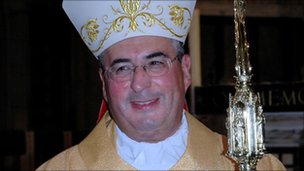 “I was surprised that the conclave was so quick. It took hardly any longer than the election of Benedict XVI. Given the pre-Conclave situation, and the absence of a single dominant figure, I can only see this quick result as God’s work. As soon as I heard I went into my chapel and offered a grateful and joyful prayer of thanksgiving
… Deo Gratias!”

Archbishop Tartaglia added: “He is a man of firsts. The first Latin Anerican. The first Jesuit. The first Pope Francis. I think we can take from his first appearance that he is a humble, spiritual and calm man. A reconciler and healer, with a strong background on social justice. His name reminds us of the little saint of Assisi. A simple man who was the poor servant of Jesus and who was given the message ‘rebuild my church’. It is a very significant message for our time. He may also have in mind St Francis Xavier the great missionary and a reminder of the need for a new evangelisation.

Archbishop Tartaglia concluded: “We missed having a Pope. Catholics feel the need for Peter. We now have Peter back. The new Pope will give us joy and confidence.”