All quiet on the Western Front 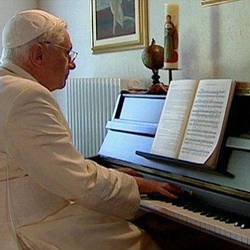 Benedict XVI at the piano

All is quiet in Castel Gandolfo today as the Pope spends the day resting and praying. The date of the Conclave is yet to be announced

Rest and prayer for the Pope Emeritus

His Holiness Benedict XVI, who is now “Emeritus Pope”, spent a quiet first night in Castel Gandolfo since his resignation yesterday evening. According to Fr. Lombardi “he slept very well.” His day began with Mass at 7 am, followed by the recitation of the Breviary, the lauds, the office of readings; and then breakfast. Pope Emeritus Benedict XVI took a large number of letters, books and music with him to Castel Gandolfo, as well as his piano. Fr. Federico Lombardi said this in his usual press conference with journalists in the Vatican Press Office.

Commenting on a telephone conversation he had with Mgr. Georg Ratzinger, who has followed Benedict XVI to Castel Gandolfo, Fr. Lombardi said: “His Holiness will spend today between prayer and reflection and he will see the messages that he has received. In the afternoon he may have his usual walk in the gardens to pray the rosary.”

The date of the Conclave will not be announced on Monday

After turning his “thoughts, which are full of gratitude, to the dear figure of the Holy Father, whom we would like to extend our affection and prayers to,” The vicar general of the diocese of Rome, Cardinal Agostino Vallini, sent a letter to priests, deacons, monks, nuns and Catholic faithful this morning, inviting “the diocesan community and all faithful to pray especially to the Lord, so that he Holy Spirit may  enlighten cardinal electors who have been entrusted with such an important task.” He urged all ecclesiastical communities to “take advantage of opportunities to give catecheses on the Pope’s ministry and to pray for the new Pope.”