750TH ANNIVERSARY OF THE MIRACLE OF BOLSENA

750TH ANNIVERSARY OF THE MIRACLE OF BOLSENA 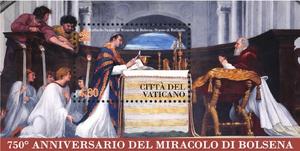 Tied to these miraculous events is also the construction of the Duomo of Orvieto where the corporal stained with blood is kept. On 11 August 1264 the miracle was officially recognized by Pope Urban IV with the bull “Transiturus de hoc mundo”, promulgated in Orvieto. A detail of a work by Raffaello Sanzio, known as the “Mass of Bolsena” (Stanze of Raphael, Vatican Museums), is reproduced on the postal minisheet which commemorates the 750 years since this miraculous event.