50 years since the death of Blessed Pope John XXIII 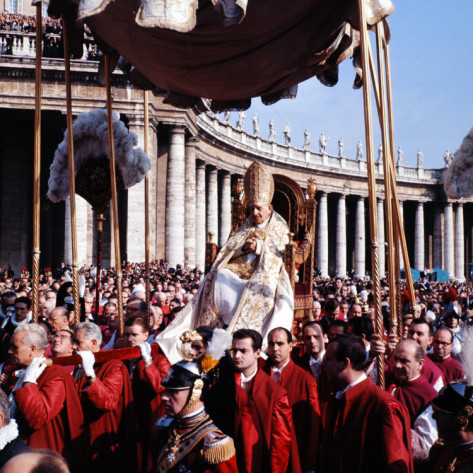 3rd June 2013 marks 50 years since the death of Pope John XXIII, who convoked the Second Vatican Ecumenical Council.  Angelo Giuseppe Roncalli was born in Sotto il Monte, a small village in the province of Bergamo, northern Italy, in 1881.

At 22 he was ordained a priest. The following year, in 1905, he was appointed secretary to his bishop.

In 1921 Benedict XV appointed him as the Italian president of the Congregation of Propaganda Fide. He was also the apostolic delegate to Bulgaria and a nuncio in Istanbul, Athens and Paris.

In 1953, Pius XII created him a cardinal and appointed him Patriarch of Venice. He lived there until 1958, when he was elected Pope at the age of 77.

During his five year pontificate, he created cardinals for the first time from countries like Tanzania, Venezuela and Mexico.

He was the first pope to receive an Anglican primate. He also excommunicated Fidel Castro in the 60’s.

He wrote eight encyclical letters, and on October 11th, 1962, he opened the Second Vatican Council.

John XXIII
“Dear children, I hear your voices! Here the whole world is represented. One could say that even the moon was rushed tonight, to look at this show.”

He presided for just eight months over the Second Vatican Council, which he called an ‘updating of the Church’. On June 3, 1963, he died of stomach cancer.

His successor, Paul VI, began his beatification process after Vatican II had ended. Blessed Pope John Paul II beatified him in 2000, 37 years after his death.

At the time, Cardinal Jose Saraiva Martins was Prefect of the Congregation for the Causes of Saints.

CARDINAL JOSÉ SARAIVA MARTINS
Prefect emeritus, Congregation for the Causes of Saints
July 15th, 2008
“I admire John XXIII because in his life and spirituality I find a true shepherd, a deeply human and communicative person. He made people long for him: he was ‘the good Pope.’ A truly extraordinary figure: he summoned the Second Vatican Council, something Pius XII had wanted to do before him.”

His feast is celebrated on October 11th, the same day the Second Vatican Council began. To this day, the Council is recognized as the most important work of his life.